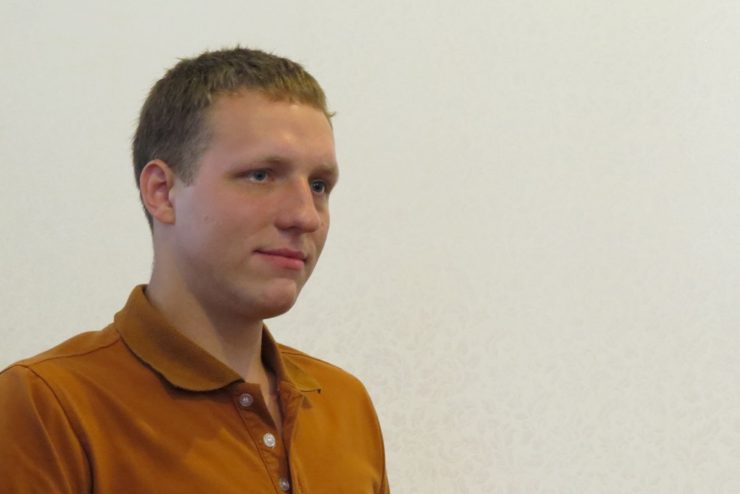 In the historic port city of Yalta, located on the Crimean Peninsula, our delegation to Russia visited the site where Churchill, Roosevelt and Stalin, in February of 1945, concluded negotiations ending World War II.

These leaders and their top advisors were also present at the creation of the United Nations and other instruments of international negotiation and non-military cooperation. Tragically, the creation of the “Cold War” was underway soon after.  Reviving tensions between the United States and Russia make it seem as though the Cold War might not have ended.

We also met with groups of young adults, teachers, and veterans of foreign wars. At each meeting, participants readily agreed that new peace agreements are needed.

Olga, a tour guide, told me that she was fairly sure most young people here in Yalta would know what NATO is, what the acronym stands for, and they would know about recent NATO developments.  Our delegation has been wondering how to cope with a quite different reality in the U.S., where many people may be poorly informed about NATO and would know even less about the Anti -Ballistic Missile  treaty that the U.S. more or less tore up in 2001.

The Federation of American Scientists, in its 2016 inventory of nuclear forces, states that Russia and the U.S. own approximately 93 percent of all nuclear warheads. Each country has roughly 4,500-4,700 warheads in its military stockpiles.

Konstatin, a veteran from the USSR war in Afghanistan, now a grandfather, spoke to us about Yalta’s history during World War II.  “Many people perished here,” he said. “More than a million perished during WWII. This tourist resort was founded on the bones of people killed in the war.” An estimated 22 to 27 million Russians died during World War II.  Konstatin urged all of us to find ways for avoiding further war, and he spoke about how funds spent on weapons are crucially needed to help heal children afflicted by disease or hunger.

Julia, a University student who wants to become an interpreter working with diplomats, said that she is glad and grateful never to have lived through a war.” I always want to choose words instead of weapons,” she said.

We asked university students what they thought about prospects for abolishing nuclear weapons. Anton, who studies engineering, told us that he believes “the youth of different countries would like to bridge the gap and work out ways to unite people.”  His words are extremely important now, as Russia and the U.S., possessing such huge stockpiles of nuclear weapons, engage in intensifying conflict.  “All of us should soften the geopolitical relations between our countries,” Anton continued, “and try to get together on the same level, on the same ground.  The idea of this future should be attractive to everyone and enable us to solve ecological problems. And if we all put efforts into reaching this idea of development and creativity, in the future, then the nuclear abolition will be something we can accomplish”

In 1954 the Soviet government transferred this largely Russian-speaking area from Russia to the Ukraine. In 2014, Ukraine’s elected president was ousted and its new government formed in part by avowed neo-Nazis. Russia occupied the Crimea and after overwhelmingly winning an uncomfortably hasty vote, annexed or “reunited” the Crimean peninsula with Russia, depending on who describes the history.  The Ukraine ouster is widely believed here and in much of the world outside the United States to have been engineered by the United States and NATO.  What plays in the U.S. as Russian aggression is seen by many here as a response to antidemocratic NATO interference along the Russian border.

It can be credibly argued that at its creation NATO’s mission was essentially defensive. Stalin was a terrifying dictator, suffering from increasing psychosis, with a long history of betraying even those who seemed to be his closest allies. Yet, as one Russian World War II veteran noted, the Russians had not tried to take over other countries far from their borders.  They actually had been very cautious and conservative about extending the boundaries or reach of the Soviet empire by military force. After World War II Russia needed to focus on rebuilding the internal Soviet economy and society.

The continuously assertive military posturing of NATO undermines and conflicts with the mission and development of instruments for international negotiation and constructive cooperation. Among the most striking examples in recent years are:

i) the decision to expand NATO into eastern and southern Europe by accepting the membership or candidacy of countries as far south as Georgia;

iii) the 2001 to the present decisions by the U.S. and NATO to invade Afghanistan and to establish long term military bases there, anchoring a military presence in the center of Central Asia.

New conflicts around the Ukraine are still brewing.

“Since Vladimir Putin’s first ascendancy to the Russian presidency in 2000, the Russian state has used its armed forces against other countries twice: against Georgia, in 2008; and now against Ukraine…

The western powers are in no position to lecture Putin, whose actions in Crimea look like a Gandhian direct action when compared to the normal US-UK mode of operation. From 28 February to 18 March, Russian forces captured over a dozen Ukrainian bases or military posts without the loss of a single life. Compare this to the US use of tank-mounted ploughs to bury alive perhaps thousands of Iraqi conscripts in desert trenches during the opening moves of the 1991 invasion of Iraq. (US colonel Lon Maggart, in charge of one of the brigades involved, estimated that between 80 and 250 Iraqis had been buried alive.)

When one thinks of the number of deaths caused by US-UK aggression since 2000, including the grim ongoing tragedy of the Iraqi civil war, it is difficult to listen to the wave of western outrage.”

“This is not to deny that Putin has presided over a repressive administration,” Mil continues, noting that Putin has also carried out atrocities, particularly the indiscriminate bombing of civilians in the southern Russian republic of Chechnya, which followed  massacres and the enforced disappearance of hundreds, perhaps thousands, of Chechens.”

I believe that the greatest threat to the long range peace and security of Europe and the United States is the reality that the military sectors of western governments and the military spending sectors of western economies are so huge and bloated, like incurable cancers, that they cannot give up on inventing military threats and advocating military solutions which powerfully undermine diplomatic efforts to secure peace.

I hope Anton’s ideas will echo in the U.S. and help steer his generation toward pursuit of acutely needed new agreements.