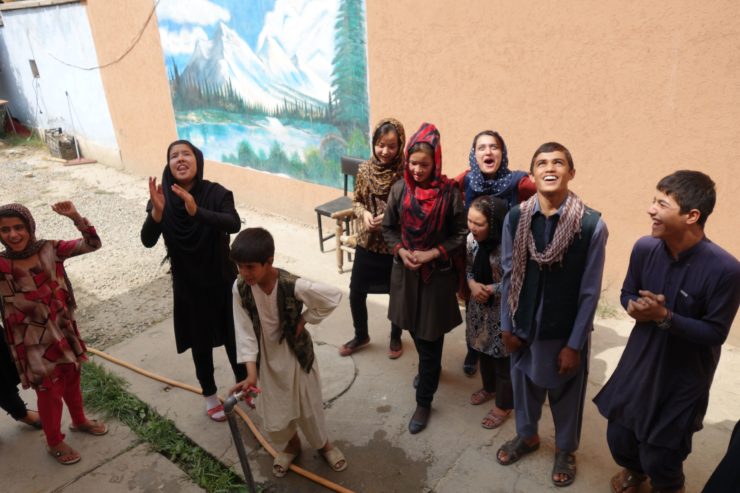 The Afghan Peace Volunteers have twenty teams in Kabul, Afghanistan, to promote the goals of an equal, nonviolent, and sustainable world. Among their efforts, they run a school that offers literacy and nonviolence classes to child laborers, and they work to restore the soil at three permaculture plots in the city.

Nisar is among the first attendees of the Street Kids School at the Borderfree Nonviolence Community Centre. He helped lead a special morning of activities, intended to orient some of the boys and girls at the school to the different projects at the Centre. Nisar, himself, has become an active volunteer, helping with the duvet distribution to families last winter and receiving a certificate for his work with the Centre’s permaculture team.

The deep roots of terrorism are from elsewhere, Bismillah says, and the results are here in the branches, the leaves, and the fruit.

He’s seated near a laptop with a few other Afghan youth. They’ve joined a Skype call with students from Singapore. A Singaporean girl has just said that she sees Afghans as terrorists. It’s a statement the Afghan Peace Volunteers have heard many times before, and their first response is a collective exhale.

The media does not expose these roots of terrorism, Bismillah adds, and it is therefore complicit in sustaining the current narrative.

Ghulam chimes in next. The media fails to share the values of the ordinary Afghan people.

What are those values? I ask when the connection with Singapore is lost.

The common denominator is care for others. I recall Ghulam’s words the next day when the street kids are building nests.

A bird’s nest may take days or weeks to build,

But four teams of students have just minutes.

They scurry in the Centre’s garden plot,

Imagination soaring as they seek

Soft materials to protect an egg.

One team finds a small scrap of blue carpet

On which four girls swirl a mound of sand and leaves.

Other teams find empty crates, and line them

Their nests filled with straw and other organic matter.

Proud of their resourcefulness, team members

Carry their nests to the Centre’s front stoop

Where Nisar stands with a clear bag of eggs.

He grins as he drops an egg into each nest.

The eggs land unbroken and the teams cheer.

But when Nisar heads to the upstairs balcony,

The new double-decker nest is barred from use

and set aside. Nisar appears above,

And again drops an egg, this one breaking

On the concrete beside team one’s nest.

He raises and lowers his arm, hesitant

To let go of the next egg. Each team’s success

Seems his. Soon, all the egg yolks are exposed.

The twenty or so youth are smiling. 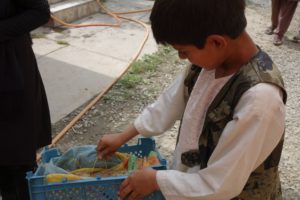 The Moon and the Stars

At night though, when she’s sad, Hadisa lies on her back and looks up at the moon and stars, telling them how she feels. If she’s had an upsetting conversation earlier in the day, she looks to the night sky for comfort. The moon and the stars are good listeners, she says. They don’t talk back.

Hadisa is one of the team coordinators at the Borderfree Centre.