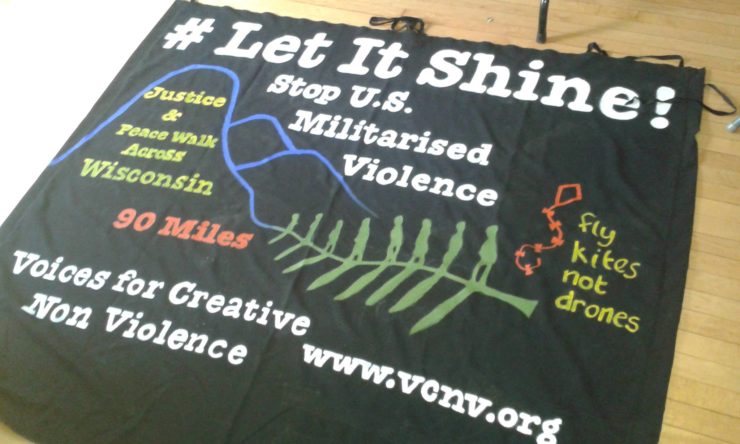 On Friday Brian Terrell will stand trial in Juneau County District Court for his part in a February 23 protest at Volk Field, a Wisconsin Air National Guard facility near Camp Douglas. The Wisconsin Coalition to Ground the Drones and End the Wars has, for more than four years, sponsored monthly protest vigils calling attention to the Volk Field facility that trains soldiers to use remotely controlled “Shadow Drones.” These drones have been instrumental in the targeted assassination program, labelled as a war crime by many legal experts. Many military experts say that drone warfare recruits more enemies for our country than it kills.

Terrell of Maloy, Iowa, and Kathy Kelly of Chicago, both co-coordinators of Voices for Creative Nonviolence, were arrested by Juneau County Sheriff’s deputies on February 23, 2016, as they attempted to enter the base with a loaf of bread and a letter for the base commander. The commander has not answered several letters mailed to him by members of the Coalition in recent years, expressing their opposition to drone warfare.

While Terrell will be tried for a noncriminal forfeiture violation of a county ordinance, “trespass to land” with a maximum penalty of $200, he and Kelly were originally arrested and charged with two more serious criminal offenses, “trespass to a dwelling” and “disorderly conduct.” Together, these two misdemeanors are punishable with up to 18 months in prison and $20,000 in fines. “Dwelling” is defined in the Wisconsin trespass statute as “a structure or that part of a structure intended to be used as a home , residence or sleeping place by one or two or more persons.” Police reports confirm that Terrell and Kelly were arrested on open land out of sight from any dwelling and do not support the allegation that they engaged in disorderly conduct. These criminal charges were eventually dismissed, but not before the Sherriff’s Department used them to hold Terrell and Kelly overnight in the Juneau County Jail on $350 bonds. Kelly declines to contest the forfeiture and will not be going to trial.

In a July 25 reply to requests by Terrell for documents under the Open Records Law and for an explanation for apparently inflated charges and other police responses to the demonstration on February 23, Juneau County Undersheriff Craig Stuchlik alleged threats made by a participant against police officers there: “Law Enforcement Officers are being targeted in the United States by hate groups because they stand for law and order. Law Enforcement Officers are being executed by these hate groups at an alarming rate and it does not appear to be slowing down. As a matter of fact, you have had a person attend your protests in Camp Douglas who has threatened to kill our Deputies. Not sure if that person is a regular member of your group or just shows up from time to time.”

Stuchlik explained in the same letter that deputies “ran” the license numbers of “all vehicles… that appeared to be involved in the protest,” even when legally parked. “When Deputies respond to such incidents, we need to know who we are dealing with,” said Stuchlik. “Thus the reason that we run license numbers. As I mentioned before, you have had a party attend your protests who has openly threatened to kill us. You seem to have different people attend your protests and thus another reason to run the license plates.” An earlier request for the department’s policy had been answered on May 4, “We do not run the license plates on legally parked vehicles” and in a May 29, letter, Stuchlik wrote, “On the date in question, only vehicles that were illegally parked had their license plates checked.” Stuchlik has refused requests for more information on these alleged threats and has not responded to an invitation to meet with members of the Coalition.

In a reply to Stuchlik, Terrell noted that “the whole purpose of … our protests against the role of the Shadow Drone in targeted assassinations by personnel trained at Volk Field, is to oppose killing, threats of killing, or violence against anyone, anywhere, for any purpose or justification whatsoever… Because we are so strongly opposed to all violence and political killings of any kind, it is highly improper for you imply, by innuendo or otherwise, that Voices for Creative Nonviolence and Wisconsin Coalition to Ground the Drones and End the Wars are ‘hate groups’ that target police officers for execution. Further, planting the suspicion that we have among us a person who would so violate the spirit and purpose of our organizations as to openly threaten violence, even to the point of murder, without identifying that person to us, looks like another assault on our groups.” The actions of the Sheriff’s Department, he said “show a disturbing pattern in Juneau County. They bring to mind the ‘chilling effects’ of McCarthyism in the 1950s and the COINTELPRO activities of the FBI in the 1960s… There is a reasonable appearance that the Juneau County Sheriff’s Department is deliberately acting to discourage citizens from exercising their rights to peaceably assemble for the redress of grievances.”

Organizers deny any association with hate groups or threats to police officers and promise that the vigils against drones at Volk Field will not be discouraged. “After 4 ½ years of citizens exercising their First Amendment rights in speaking out against US drone warfare at Volk Field, the harassment  and intimidation by the Juneau County sheriff’s department continues to escalate,” says Joy First, a Mount Horeb, Wisconsin, activist.