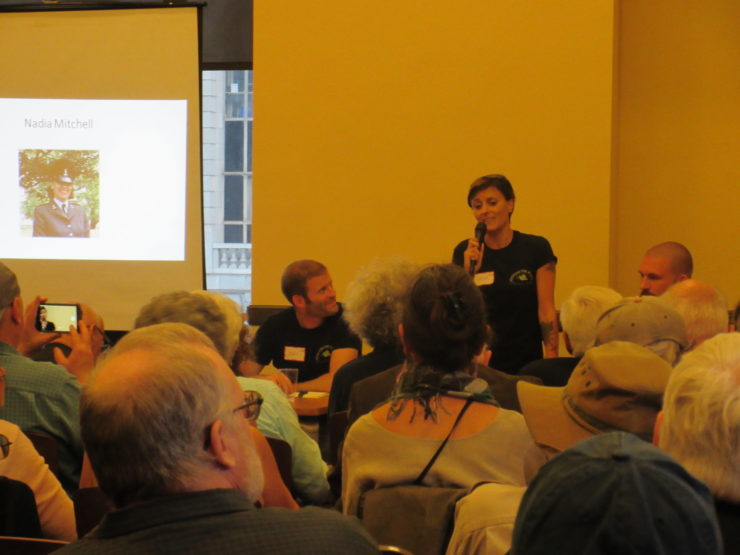 “How vast and how merciless is the nature of power, with what unbelievable cruelty people treat each other.” James Baldwin

“War has become a permanent condition,” Andrew Bacevich declared during his talk at the Veterans for Peace Convention.

The United States being at war has become white noise that we are still searching for the button to turn off. This year’s Veterans for Peace Convention theme was ‘Peace at Home, Peace abroad: A Just and Sustainable Future for the World’s Children’. Averaging twelve workshops a day, it was a full convention, in terms of topics and participants.

Scanning the room, you would not immediately think this crowd had many commonalities. Each veteran was as different: long hair, no hair, political buttons on every inch of clothing, earrings, tattoos, blazers, cut-offs and button-ups. They had come together to collectively conceive actions and practices that would bring us all out of this war narrative that the United States government has written.

Bacevich goes on to talk about the many U.S. citizens who are misinformed and apathetic about who benefits from wars, and why countless numbers of veterans come home with Post Traumatic Stress Disorder, (PTSD). Many citizens do not have the topic of “why are we at war?” on their to-do lists because they are working tirelessly to make ends meet or are distracted by the consumerism messaging and are busy trying to buy a level of comfort that was promised they should and could attain for themselves and their families. As U.S. citizens, we are urgently struggling to create morally dignified laws and services to govern ourselves. If our government would turn their efforts from war making and invest them in creating inclusive policies and institutions that foster critical thinking education, livable wages, health care and social services, that would be practicing peace at home.

As a U.S. citizen, I have inherited between twenty to twenty-five wars and proxy wars from the time of the Cold War to the War on Terror in Afghanistan, Iraq, Pakistan, Somalia, Yemen; Conflict in Libya (Libyan Civil War), Syria and growing. All of these have not been on U.S. soil. Below is a list of the inheritance of war for someone who is in the country we decide to go to war with, found in ‘The United Nations Security Council and War: The Evolution of Thought and Practice since 1945’ Edited by Vaughan Lowe, Adam Roberts, Jennifer Welsh, and Dominik Zaum.

These military institutions created and governed by the intoxication of power and domination utilizing fear and dehumanization need to end.

Roy Scranton said, “Peace is an action not a state.” Those among us that are the least empowered, impoverished, sick, and rejected are a reflection of ourselves and our government. We belong to each other; we depend on each other just as we are dependent on the earth and the health of the environment. Peace in action is going out to uplift, restore and serve those sick, grieved and powerless. Let us support, join and create social relationships across many borders: states, countries, continents, economic, ethnic, gender based and racial divides. Doing so lets us arrive at a more equitable and honest way of living that will exhibit a viable alternative to the belief that being at war keeps us safer.

“Without community there is no liberation…community must not mean a shedding of our differences, nor the pathetic pretense that these differences do not exist.” Audre Lorde