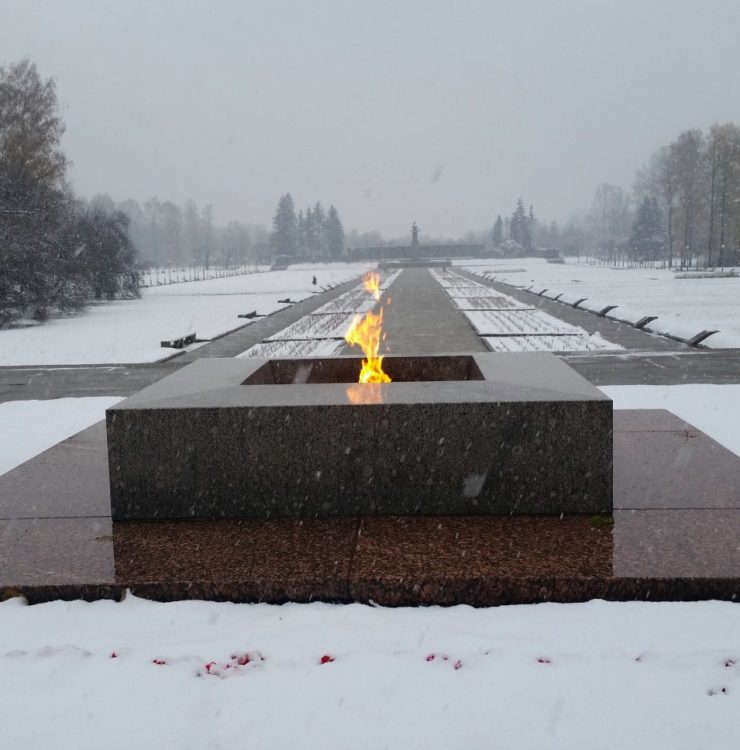 Here in Russia, where I have been traveling as part of a small delegation organized by Voices for Creative Nonviolence,  the people with whom we have spoken have no illusions about war and its effects. “We remember what war is like,” Nikolay, a scientist and businessman, told us. “We have a genetic memory,” referring to close relatives – parents, grandparents – who passed on their experience of the Great Purge and/or the siege of Leningrad, when nearly a million Russians died of starvation and disease because Germany cut off all imports and exports. “Three of my grandmother’s brothers and four of my grandfather’s brothers died in the war. My mother was born in 1937. She was lucky to survive the war. She lived in a village that the Nazis overran on their approach to Moscow. They bombed and burned it. Half the village burned. She just happened to be in the other half of the town when they set it on fire. Many of her friends died.”

On our last evening in St. Petersburg, we were glad to have dinner at a Georgian restaurant with a young Russian woman whom we had met the day before at a friend’s home. Alina is bright and open and unselfish. In rapid-fire English with a slight British accent, she spoke passionately about the harsh effects of Russia’s worsening economy and its causes. “The drop in global oil prices and the sanctions against Russia are hurting our economy. And it’s causing a lot of pain for people. Especially for elderly people who are on a fixed income. And it’s worse outside of the cities, where salaries are really low, but the cost of living isn’t so different (from the cities). You’ve only been in Moscow and St. Petersburg, but it’s really bad in the provinces. If you went there, you wouldn’t believe it.” This confirmed what we’d heard when we met days earlier with Russian social workers. Alina told us that “food in Russia is cheap for foreigners and expensive for Russians, and it’s getting worse. I spend almost half my salary on food. And transportation and housing are really expensive, too.”

I’m reminded of travel to Iraq which I undertook in the mid-1990s when small groups of U.S. and British people went to Iraq in defiance of federal law and in opposition to a brutal international economic embargo. We were portrayed as fools playing into the hands of the “enemy.”   Mainstream media convinced people that Saddam Hussein was not only a threat to vital U.S. interests in the region but also a person with imperial ambitions who would stop at nothing to accomplish them. Comparisons were made with Hitler, as if the means at his disposal were comparable, despite the fact that the Iraqi army, including its vaunted Republican Guard, had collapsed in a matter of weeks when the U.S. invaded in 1991, and the economic embargo had strangled Iraq’s economy and destroyed its ability even to care for itself, let alone pursue regional domination. All of this, of course, was widely understood by the U.S. media, but it didn’t stop an energetic and unyielding portrayal of Saddam Hussein as a credible threat to the world. And so U.S. people, who surely could have handled a more complex analysis, came to accept and believe this. More, they came to see the economic warfare as a point of honor, U.S. foreign policy once again working for the benefit of the world (even if the world wasn’t grateful!), including Iraqi people who clearly needed help deposing a cruel and dangerous dictator.

This failure of the U.S. media to break its addiction to governmental propaganda provided necessary cover for U.S. foreign policies that caused hundreds of thousands of children under the age of five to die from preventable diseases, primarily related to water-borne infections. They died in large numbers day after day, month after month, year after year, unnecessarily, while their desperate parents held them, while exhausted doctors could do nothing to save them because they couldn’t get the once easily-obtainable antibiotics and rehydration fluids. Despite the magnitude of the carnage in Iraq, despite the heart-rending scenes playing out daily in hospitals and homes, despite easy access to abundant and reliable information and images, the mainstream media (with notable exceptions in later years) averted its eyes and stuck to its narrow obsessive-compulsions.  And the children died As early as 1996, UNICEF published a report stating that 4,500 Iraqi children under the age of five were dying each month, victims of a brutal, lethal economic warfare.

The U.S. levied sanctions against Russia in 2014, stating they were in response to Russian military actions in Ukraine, and today the White House openly identifies increased sanctions as a possible response to Russian support of the Syrian government. Just as the American media ignored the effects of the sanctions regime on ordinary Iraqis, so today it fails to consider the plight of ordinary Russians when analyzing the success of sanctions. An October 26th article in the Chicago Tribune noted that sanctions are implicated in a 3.7% contraction of the Russian economy in 2015, with a further contraction expected over 2016, but the author failed to consider possible hardships on Russian people, as if economies somehow only effect government revenues and not people’s lives.

While the current sanctions regime may strike people in the U.S. as a justifiable, tempered, nonviolent policy, it begs many questions, not least of all: who gives the U.S. the right to do this? Of course, this is a forbidden question. The U.S. right to levy sanctions against Russia and to pressure European nations to participate is as sacrosanct as its right to build military bases in countries along Russia’s border. Does anyone in the media question that? It is as sacrosanct, apparently, as the U.S. right to engage in military action in Syria, Afghanistan, Iraq, and anywhere else it chooses. So, if Russia deserves to be sanctioned for its actions in Europe, does the U.S. not also deserve to be sanctioned for building these bases and participating in NATO military exercises in countries bordering Russia? Why are Russian military actions in Syria different than U.S. military actions in Syria and elsewhere in the region? Who was there to sanction the U.S. for its role in the horrible bombing of the MSF hospital in Afghanistan and the bombing of hospitals in Yemen? Who sanctions the U.S. when its drones bomb a wedding party or a civilian convoy, or when targeted assassinations kill innocent civilians, as they often do? Or when U.S. airstrikes kill civilians, as happened just days ago in Kunduz, Afghanistan?

U.S. people can learn something important from our Russian counterparts – that is, ordinary Russians who are at least as opposed to war as we are. They seem to understand the double standard operating in mass media and the danger it poses. But until we see it and start asking difficult questions, we are at risk of being dupes, not of Vladimir Putin but of our own government. 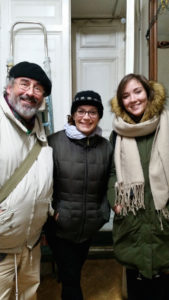 Alina, on the right, with VCNV activists Brian Terrell and Erica Brock 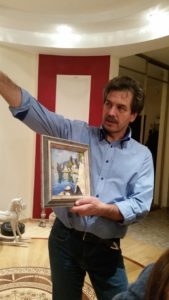 Nikolay in his St. Petersburg home with a painting of Chekhov’s dacha in Ukraine 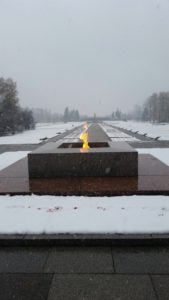 Memorial flame at Piskariovskoye Cemetery in St. Petersburg, where nearly half a million victims of the siege of Leningrad are buried. 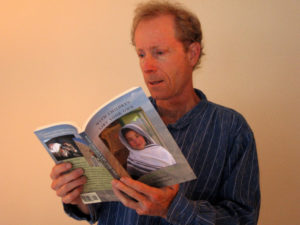