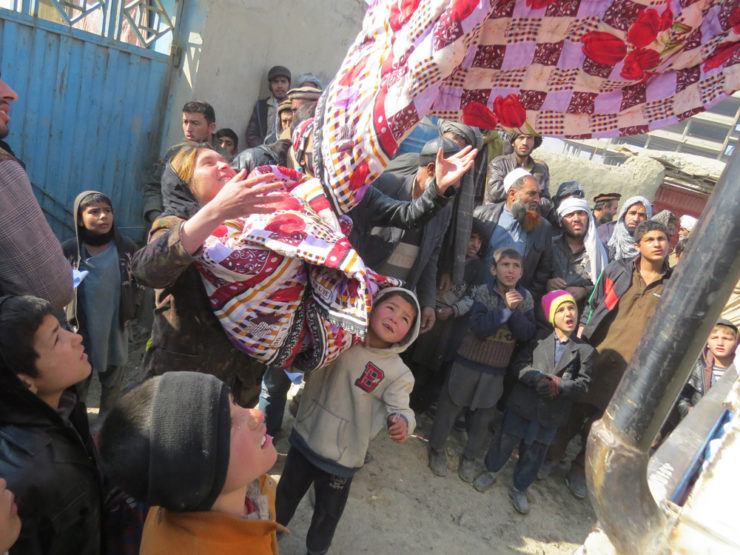 “I was frightened. I cried,” she seemed like both a statue and a radio,

numb and alive, not shy about the horrors she had survived.

“There were bombs dropping from the heavens,

and firing from the army, the Taliban,

yes, yes, from everyone,

Already like a teenage mother to her younger siblings

who huddled around her, she insisted,

“We had to run, to escape Kunduz.”

Do we really expect her to have stayed put,

to not seek refuge from weapons the powers produce?

“And now? We eat little scraps found on the streets.

A few unwashed glasses were in a corner,

and also Nasriya, their latest sibling,

gazing at her refugee world from a hanging baby cot,

no nursery rhymes, no birthday candles, no photo albums.

Sadly, such stories are not news these days,

not ‘attractive’ enough for viewers,

though it ought to be important to a humanity that is intact and engaged:

it is a brutal mirror of how we adults

are successfully destroying everything children dream of.

It is an upside-down ‘Toyota’ car-world

which presumes that kids who do ‘non-job’ jobs are lazy,

like the boy I saw on the road to the refugee camp.

He was burning incense in a black tin while asking for a few Afghanis.

He was really asking for bread.

We forget that Afghan children are like Shuba with the blue scarf,

standing with her friends at the doorway of a makeshift school,

answering me without hesitation,

It was as if she was daring me,

What did you think I would have become?”

I tried to imagine the lack of regular meals

for these refugees from Kunduz, Parwan, Kapisa

and returnees from Pakistan and Iran.

chucked into corners of unwelcome,

in air so polluted they can’t see the stars.

How could we make millions of humans feel this way,

as if their address was not ‘Mother Earth’?

There was a noisy sense that their souls will never be heard.

Their faces seemed like art which had run out of purpose,

their eyes unable to cope with what we’re doing to one another,

with how we ‘vote’ for our oppressors

and habitually gobble up advertisements and stuff.

we must have already died,

and this! This existence

was an orchestrated taunt, a haunt.

One of the elders, Kaka Ghulam, said,

“Several strongmen came to chase us away from this land.

They shot and killed my son for resisting.

No media was allowed to interview us after the incident.”

He would have told any journalist that

it was not the first son he had lost in a year.

And the journalist may have been threatened or killed afterwards.

but she is likely to be familiar with fear,

the breathlessness of bullets whistling towards bodies,

seeking to burst through flesh and bone,

to shatter all the best values we long for.

We don’t spare children either.

We don’t bother to count them,

but their transient innocence defies our neglect

and flock around the camera,

if only to see themselves acknowledged on the digital screen,

The human spirit of the adults inspired me too,

that they would cling on to humour,

laugh for a moment

and preserve their sense of happiness and gratitude

despite being misconstrued as potential ‘troublemakers’.

Whatever they may have been,

they are now all labelled ‘refugees’ or IDPs,

their human needs termed ‘the rights of refugees’,

so governments can cite national security as a sacred reason

to deny them the right to food, water, shelter, safety from death.

In the light, dust, pleas, and duvet distribution lists

were emotions too recent to be assuaged.

I witnessed a broken-ness lost to elitist conferences

that decide on the same old, same old.

Even if we couldn’t imagine the war-torn feelings of one mother,

how could we miss the plight of 65 million refugees worldwide?

Each of their expressions, without speaking, spoke to me,

What surrounds these 700 refugee families?

Commander-in-Chiefs from too many countries,

an economic war disguised as democracy,

and an internet that still can’t relate with the mass human condition.

I could have felt very helpless,

if not for the complex emotions swarming me,

from our human family giving and receiving duvets,

from love which can transform fury.