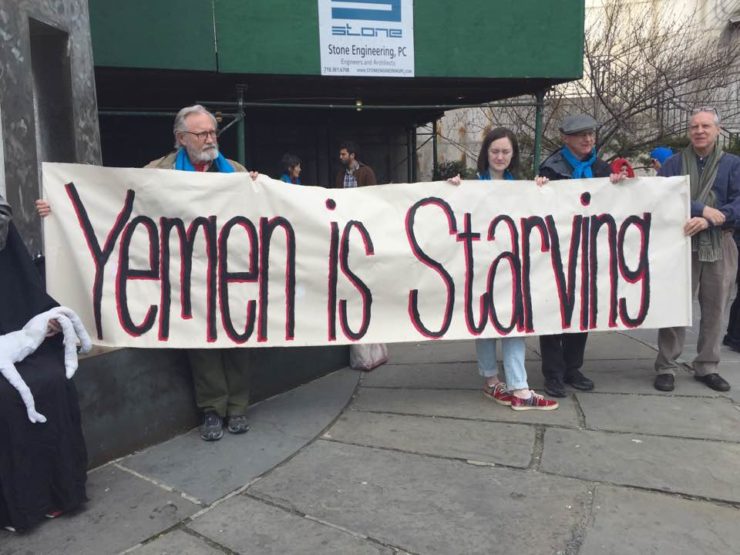 Death in Yemen – Made in the USA!
Stop the Saudi / U.S. Assault on  Yemen!
DAY THREE OF DC SOLIDARITY ACTIONS
April 12, 2017
Today people in DC held a protest in front of the Saudi Embassy in solidarity with the third day of a fast by people at the United Nations on behalf of the besieged people of Yemen.  We are all calling attention to the deadly tragedy facing Yemeni civilians whose country, ravaged by civil war and regularly targeted with Saudi and U.S. airstrikes, is now on the brink of famine.
Officers and officials came out of the Embassy to look at us and take our pictures, but wouldn’t accept our leaflets or talk to us, and unlike at the Yemen Embassy yesterday, they did not invite us in.  Many passers-by accepted leaflets and gave us thumbs-up, but one person muttered “Yay Trump” and another said we should be arrested for disturbing the peace.
After an hour we went across the street to the Kennedy Center to a free musical performance at 6:00.  We took our seats along with a very large crowd.  Ten minutes before the show was to begin, David Barrows, sporting a tuxedo, went to the front and began addressing the crowd, flanked by others holding the large banner:  Stop US/Saudi bombing of Yemen. He asked for the audience’s attention for a few minutes before the show, so that he could tell them about the suffering of the people of Yemen.  He described the Saudi/US air strikes that have killed so many civilians, including thousands of children.  He then talked about the blockades that are preventing desperately needed food and humanitarian aid from being brought into the country.  When he concluded by thanking the audience for listening, they applauded.
After David and the others took their seats, a delegation of Kennedy Center officials and security police came down the aisle and demanded that they accompany the officials out of the hall.  When they explained that they had completed their “performance” and now wanted to stay to watch the show, the audience began chanting, “Let them stay!”  After a bit of negotiation and a promise that they really had finished saying what they had to say, the officials allowed them to stay, to another round of applause.
And then we were all treated to an amazing performance by the Nile Project: artists from the 11 Nile countries performing songs with the rich diversity of one of the oldest places on Earth.  What an amazing evening!