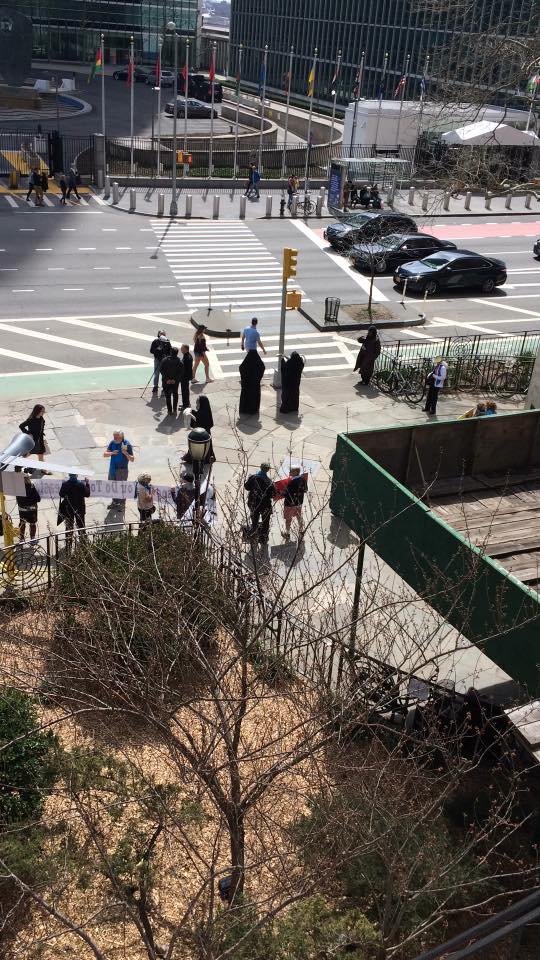 Day 3 of the Fast For Yemen Vigil begins again at the Isaiah Wall across from the United Nations today.

“UNICEF estimates that more than 460,000 children in Yemen face severe malnutrition, while 3.3 million children and pregnant or lactating women suffer acute malnutrition. More than 10,000 people have been killed, including 1,564 children, and millions have been displaced from their homes. All member states of the UN must urge an end to the blockade and airstrikes, a silencing of all guns, and a negotiated settlement to the war in Yemen. While Yemeni children are starving, US weapons makers, including General Dynamics, Raytheon, and Lockheed Martin, are profiting from weapon sales to Saudi Arabia.” (Kathy Kelly)

No Future in War- A week long Yemen series of CodePink demonstrations in solidarity with Kathy Kelly of Voices for Creative Nonviolence who is heading up people at the UN that are engaging in a fast to bring attention to the ongoing war on Yemen and the ensuing famine.
Day three- to our joyful surprise as we arrived at the Embassy of the Republic of Yemen to deliver a letter for peace, we were able to obtain a meeting with Ambassador Dr Ahmed A. Bin Mubarak and his assistant Zeyneb Khechmoune. During our nearly two hour roundtable meeting we engaged in an indepth discussion concerning all the circumstances surrounding the war in Yemen. We were able to mutually agree that we are all dedicated to ending the war and famine but that the representatives of Yemen are struggling on how to accomplish that.

We come today as American citizens who are deeply concerned about the ongoing war in Yemen that has taken the lives of so many of your citizens. We are not partisan; we have no “side” that we are supporting or opposing. What we are opposing is the ongoing violence and the hunger that is ravaging the lives of so many Yemenis, especially the children. Our hearts go out to these children and their parents. We, the entire international community, must find a way to stop this.

From our perspective, here are some issues that must be addressed:
1. Stop the attack on the Hodeidah port: We are aware that the war has led to a terrible humanitarian crisis, and that aid groups are having great difficulty getting food to the people in need. This crisis could become even more catastrophic if the planned attack on the port of Hodeidah takes place because, as you well know, this is the port through which the majority of aid passes. We ask you to oppose this attack and instead make sure that humanitarian aid can reach the people in most need.
2. We must stop our government’s interference: We are concerned that our government has become embroiled in this crisis by supporting one side, the side of President Hadi and the Saudis, in their fight against the Houthis. The US should not be taking sides in another country’s internal conflict. The continued US supply of weapons and logistical support to the Saudis makes the US complicit the taking of Yemeni lives and the destruction of so much of the nation’s infrastructure. We therefore call on our own government to stop weapons sales to the Saudis and stop the logistical support to the Saudi military that allows their deadly bombing sorties to continue. The US should play a role in trying to find a political solution, not supporting one side in this deadly conflict. It should also give much more of the $3 billion in humanitarian aid the United Nations is calling for, especially because the United States has been responsible for so much of the destruction.
3. A political solution is the only answer: We have seen how, after the ouster of President Saleh in 2013, the Yemeni people came together in an admirable dialogue that included all sectors of the Yemeni community. Some of us had the great opportunity to witness part of this process and were extremely impressed. While the outcome was obviously not sufficient to stop the ensuing military struggle (and we condemn the Houthis for taking up arms instead of continuing to use nonviolent means), this process of dialogue must be taken up again. There is no military solution, especially now that outside powers have become involved. Dialogue is the only answer and the sooner it starts, the better. For the sake of the suffering children, please, stop the fighting and start the talking.

We thank you for taking the time to receive us, and look forward to the day when Yemen is at peace, when your beautiful nation is rebuilt and when the Yemeni children can have a future free of hunger and fear.

Thank you for your witness!