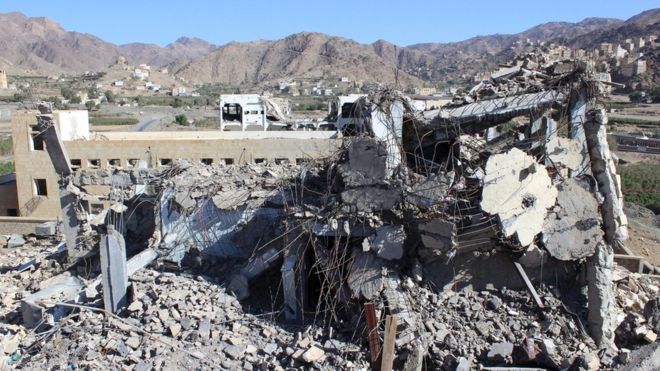 “Jan Egeland, the current head of the Norwegian Refugee Council, condemned ‘this gigantic failure of international diplomacy’ and said that only 3 million people out of the 7 million people who were starving had been fed last month.

“‘Men with guns and power inside Yemen as well as in regional and international capitals are undermining every effort to avert an entirely preventable famine,’ he said, ‘as well as the collapse of health and education services for millions of children.’ …

“Egeland appealed to the parties of the conflict to agree to a ceasefire and to keep the main humanitarian supply route, the port of Hodeida, open. There have been warnings of an attack on the port by the Saudi-led coalition. He said: ‘Nowhere on Earth are as many lives at risk. We are not even sure that the main humanitarian lifeline through the port of Hodeida will be kept open.'”
See CNN video: “World letting Yemen ‘be engulfed in famine.'”
ROBERT NAIMAN, cell: (217) 979-2857, naiman@justforeignpolicy.org, @naiman
Policy director at Just Foreign Policy, Naiman recently wrote the piece “Pocan, Amash Invoke War Powers as Trump Mulls Pushing Yemen Into Famine.” Also see from the group: “Join 9 Senators to Tell Saudi Arabia: ‘Hodeida Must Be Spared’!“

TARIQ AL-AMRI, YAHYA AHMED, [in Yemen] tayalamry2003@yahoo.com (contact can be intermittent, best to email first): 011-967-777-269-523
Al-Amri and Ahmed are with the Chapter for Compassion Foundation in Yemen. Ahmed said today: “The situation in Yemen is critical. People are out of food, medical supplies and are increasingly homeless.”

Kelly is co-coordinator of Voices for Creative Nonviolence. She has been repeatedly nominated for the Nobel Peace Prize. She just wrote the piece “In Yemen, Shocked to His Bones,” which states: “Egeland and the NRC call on all parties to the conflict, including Saudi Arabia, the United Arab Emirates, Iran, the U.S. and the U.K. to negotiate a cease fire.

“This weekend, the situation stands poised to become dramatically worse with the apparently imminent bombing, by Saudi Arabia, one of the U.S.’ closest allies, of the aid lifeline which is the port of Hodeida.

“Egeland stresses the vital importance of keeping humanitarian aid flowing through Hodeida, a port which stands mere days or hours from destruction. ‘The Saudi-led, Western-backed military coalition has threatened to attack the port,’ said Egeland, ‘which would likely destroy it and cut supplies to millions of hungry civilians.’ U.S. Congresspeople demanding a stay on destruction of the port have as yet won no concessions from the Saudi or U.S governments.

“The U.S. Government has as yet sounded no note of particular urgency about ending or suspending the conflict, nor has its close ally in the Saudi dictatorship. Saudi Arabia’s Defense Minister, Prince Mohammed bin Salman recently gave ‘a positive view of the war in Yemen.'”