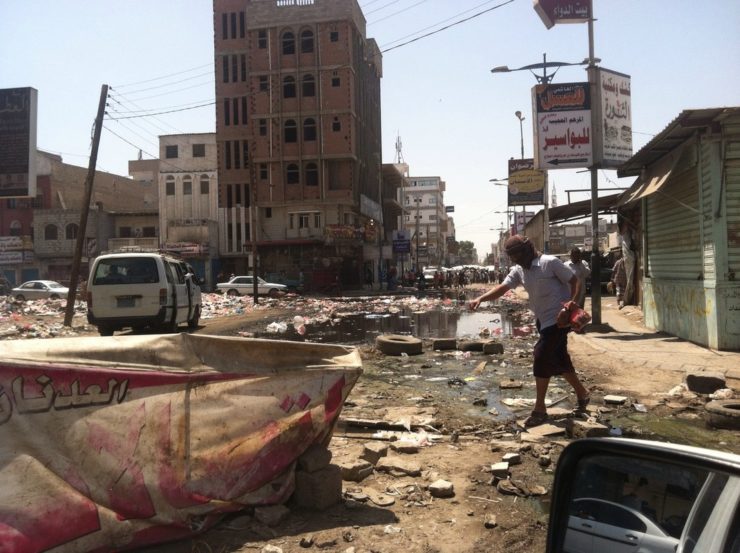 On Tuesday, May 9th, from 11:00 a.m. – 2:00 p.m. members of Voices in the Wilderness and World Beyond War will engage passers-by outside the Kluczynski Federal Building (230 S. Dearborn) in a “penny poll” regarding humanitarian relief for war and famine-stricken Yemen. The poll device contains series of tubes which represent how people would like to direct U.S. funds. UN officials say that 17 million Yemenis lack access to food, 7 million of whom are on the brink of famine. A Saudi-led coalition, supported by the U.S., has steadily bombed Yemeni cities, towns and infrastructure since March of 2015. The Saudis have also imposed a naval blockade on the country, aiming to starve and eliminate Houthi tribal rebels who have been party to a civil war with Yemen’s president and his supporters.  The Saudis claim the Houthis are supported by Iran. Saudi Arabia’s Minister of Defense recently said that his country will be able to tire the tribal fighters out through prolonged conflict.

Yemen Is Starving: Peace activists, alarmed by the mounting humanitarian crisis in Yemen, to hold a penny poll outside the Federal Building

Chicago — On May 9, 2017, from 11:00 a.m. – 1:00 p.m., in the Kluczynski Federal Building plaza at 230 S. Dearborn, Voices for Creative Nonviolence and World Beyond War activists will engage passersby in a penny poll regarding humanitarian relief for war and famine-stricken Yemen. Using the poll device, people can “spend” symbolic wooden pennies to assist Yemenis in averting famine or direct their “pennies” to continue supporting military contractors that are shipping weapons to Saudi Arabia. The Saudis, through two years of airstrikes and blockades, have escalated the conflict in Yemen and exacerbated near famine conditions.

Ravaged by war, blockaded by sea, and regularly targeted with Saudi and U.S. airstrikes, Yemen is now on the brink of total famine.

Yemen is currently being ravaged by a brutal conflict, with injustices and atrocities on all sides. More than 10,000 people have been killed, including 1,564 children, and millions have been displaced from their homes. UNICEF estimates that more than 460,000 children in Yemen face severe malnutrition, while 3.3 million children and pregnant or lactating women suffer acute malnutrition. The U.S. backed Saudi-led coalition is also enforcing a sea blockade on rebel-held areas. Yemen imports 90% of its food; because of the blockade, food and fuel prices are rising and scarcity is at crisis levels. While Yemeni children are starving, US weapons makers, including General Dynamics, Raytheon, and Lockheed Martin, are profiting from weapon sales to Saudi Arabia.

At this critical juncture, U.S. people should call on their elected representatives to urge an end to the blockade and airstrikes, a silencing of all guns, and a negotiated settlement to the war in Yemen.

With Congress in recess, this is an ideal time to call elected representatives and urge them to join colleagues in letters to:

2)  to Prince Mohammed bin Khalid, Defense Minister of Saudi Arabia, urging that the crucial Yemeni port of Hodeida be protected from military assault.