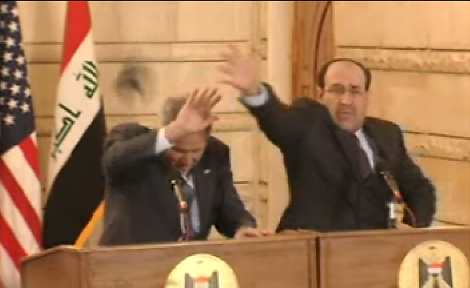 We share one of Voices co-coordinator Cathy Breen’s “Dear Friends” letters from Najaf, in Iraq.

We are two weeks into the conversational English class. The participants are growing in self-confidence and speaking skills. In our class today we want to talk about emotions and feelings.

It is early morning and the house is quiet. I try to give free expression to my thoughts. What makes us sad? What gives us joy? What makes us angry? What makes us laugh? What causes us shame? I imagine many scenarios.
A mother or father takes something from their small child, maybe a kitchen knife or matches. In a moment of anger, the child yells out “I hate you, I hate you.” We have all faced similar situations. But of course there are other types of anger. One is righteous anger.

My thoughts turn to a shoe thrower.

On Dec. 14, 2008 an Iraqi journalist, Muntadher al Zaidi threw his two shoes at president George W. Bush at a press conference in Baghdad. Did he have a right to be angry?

In an interview about nine months after the incident Muntadher states:

“What compelled me to act is the injustice that befell my people, and how the occupation wanted to humiliate my homeland by putting it under its boot.

“Over recent years, more than a million martyrs have fallen by the bullets of the occupation and Iraq is now filled with more than five million orphans, a million widows and hundreds of thousands of maimed. Many millions are homeless inside and outside the country.

“We used to be a nation in which the Arab would share with the Turkmen and the Kurd and the Assyrian and the Sabean and the Yazid his daily bread. And the Shia would pray with the Sunni in one line. And the Muslim would celebrate with the Christian the birthday of Christ. This despite the fact that we shared hunger under sanctions for more than a decade.

“Our patience and our solidarity did not make us forget the oppression. But the invasion divided brother from brother, neighbor from neighbor. It turned our homes into funeral tents.

“I am not a hero. But I have a point of view. I have a stance. It humiliated me to see my country humiliated; and to see my Baghdad burned, my people killed. Thousands of tragic pictures remained in my head, pushing me towards the path of confrontation. The scandal of Abu Ghraib. The massacre of Falluja, Najaf, Haditha, Sadr City, Basra, Diyala, Mosul, Tal Afar, and every inch of our wounded land. I traveled through my burning land and saw with my own eyes the pain of the victims, and heard with my own ears the screams of the orphans and the bereaved. And a feeling of shame haunted me like an ugly name because I was powerless.”

Nine years have passed since Muntadher threw his shoes at Bush. I imagine the recent destruction of Mosel and the countless dead and displaced. All eyes are now turned toward Kirkuk, the newest victim.

I might be smiling on the outside, but inside I am weeping in shame.