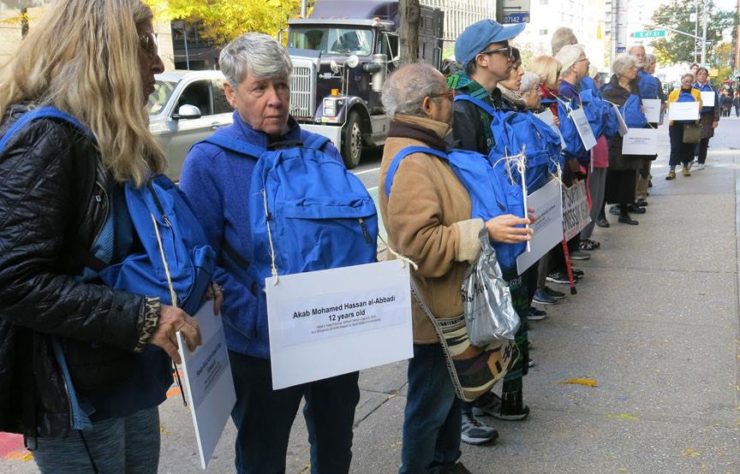 Over these past three days, Voices and a coalition of justice-minded organizations have been at and around the United Nations in New York City protesting the ongoing U.S.-Saudi attack on famine-imperilled Yemen.  Details are available at www.vcnv.org along with next steps for people looking for ways to get involved.  Participants Kathy Kelly, Brian Terrell, and Jules Orkin write here about the third and final day of protests:

We started our NYC activities this past Tuesday in soggy style, but yesterday, under brilliant sunny skies, the action became a moving procession. About 70 people formed a single file to  carry backpacks, placards, signs bearing the names of children, and various banners, past the U.S. Mission to the UN, past the Saudi Mission, and over to the consulate.  Today we did the same, anticipating that those who stood in front of the consulate would be arrested.

Independent news outlets such as Al Jazeera and Democracy Now! came out to cover us – Kathy Kelly will be interviewed on the protests and on the general situation in Yemen on the DN! broadcast tomorrow, Friday November 10th. 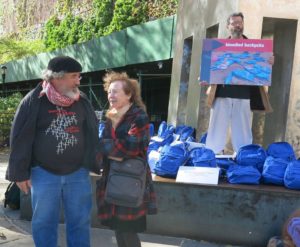 By 11:30 this morning, on Dorothy Day’s birthday, about 90 people had gathered at the Isaiah Wall for a procession to the Saudi consulate. The mourning women led our march, garbed in large masks and veils, holding limp grey dolls that represent the thousands of children facing death in Yemen.  Jun Sun and a companion followed, their drumbeats guiding us. Six people carried placards describing the terrible attack on a children’s schoolbus in northern Yemen. 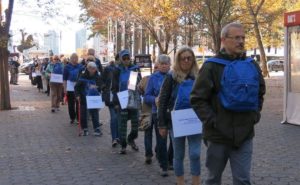 The attack happened on August 9, 2018. This week in Yemen, children who had survived were going back for the first time to their classes, carrying their blue U.N. backpacks from the day of the attack, splattered with their classmates’ blood.  So today in New York, people willing to risk arrest carried blue backpacks and signs naming the children who had been killed. Others followed with banners. Nick Mottern joined us with a drone replica, an apt reminder of U.S. aerial attacks and drone surveillance in Yemen.

Felton Davis and Ed Kinane held a banner and blocked the entrance to the U.S. Mission to the UN. They were later released without charge.
Th 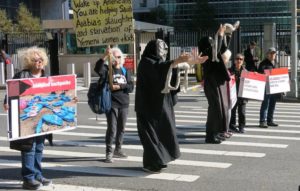 e procession continued past the Saudi Mission to the UN and over to the Saudi Consulate on Second Avenue.  Members of our group swiftly set up a presence in front of three entrances to the building, urging people not to enter because it is too dangerous: criminal activities have been going on and all who have cause to be in the building should be aware of the crucial importance of ending the murderous, tortuous activities carried out by the Saudi government. Brian Terrell points out that, just as you would be concerned if office workers in your building were involved in human trafficking or drug smuggling, people should be alarmed over the Saudi government’s murderous practices as it makes war on Yemen.  As Buddy Bell intoned the names of children killed on August 9 and raised a lament for Yemeni families, our response was “We Remember You.”
We sang and chanted for over two hours. At least two dozen police carrying plastic cuffs arrived, along with a NYPD Detective named Bogucki, who told us he recalled arresting some of us during the late ’90s and in the years leading up to the Shock and Awe bombing in Iraq. From 1996 to 2003, we had protested the sacrifice and slaughter of Iraqi children.  Detective Bogucki said we are preaching to the choir when we tell him about crimes happening inside the consulate, and other off 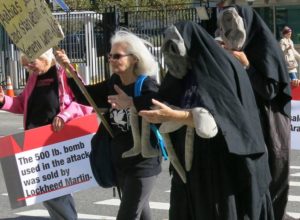 ices that prolong war in Yemen. Recognizing our complicity, we believe “the choir” must unite by resisting child sacrifice, child slaughter.
Word arrived from one of the blockade groups that the New York Police Department had decided not to arrest anyone in our group. We eventually formed a circle, confirmed our collective determination to continue outreach, witness and resistance, expressed many thank yous, and dispersed.
Our hearts remain with Yemeni families agonizing over the dire plight of loved ones in Yemen. We thank Yemenis who have stood up, in more precarious settings, to call for an end to the fighting. And we look forward to supporting their calls for peace in every way we can, until this dreadful war is over.