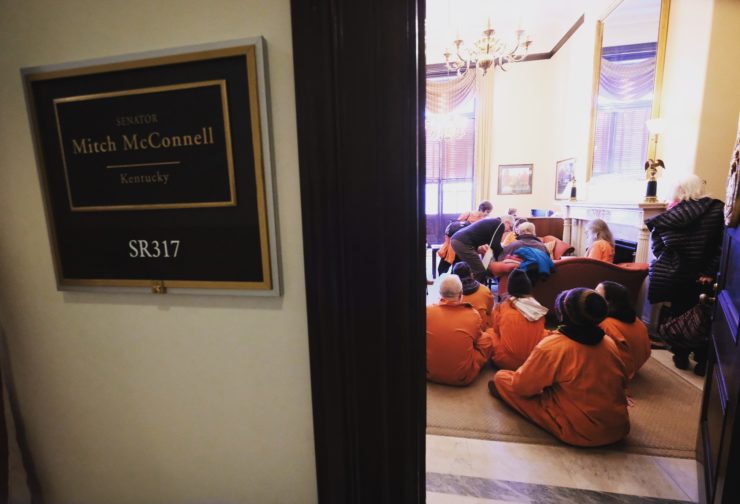 Activists call on McConnell to schedule a vote on the War Powers Act, allowing discussion in the Senate regarding the war on Yemen, and to fully support closure of Guantanamo prison.

Four human rights activists were arrested today and charged with  demonstrating inside the U.S. Capitol after sitting-in at the office of Senate Majority Leader Mitch McConnell. They were among a group of about twenty-five Witness Against Torture activists who entered the office at 3:00 p.m. Many were clad in orange jumpsuits resembling those worn by prisoners in Guantanamo. They delivered a letter requesting McConnell’s assistance on two matters concerning human rights violations.

The letter asks him to “schedule a vote on the War Powers Act to end U.S. military involvement with Saudi Arabia and the United Arab Emirates in the terror attacks on the people of Yemen.” The letter also asks that he use his influence to close down the prison facilities at Guantanamo.

Two of McConnell’s aides listened to the activists’ concerns for an hour.

The four who were arrested had remained seated in a conference room inside the Senator’s office. They said they were prepared to wait in McConnell’s office until he is able to meet with them and confirm that he will take action on a vote on the War Powers Act regarding Yemen and initiate a process to close down the prison at Guantanamo.