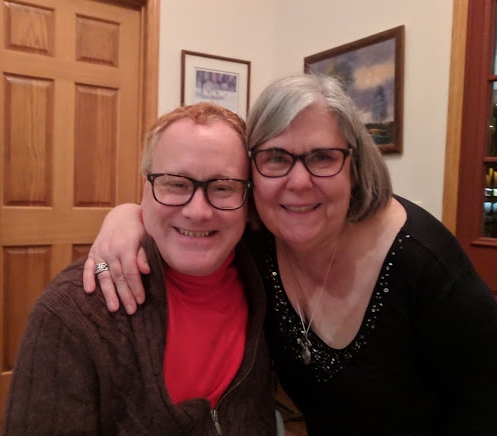 It was March of 2003 and President Bush had been talking about attacking Iraq with “shock and awe”.  After marching in the streets for several weeks, I knew what I was doing was not enough because what was about to happen was going to be so egregious, so horrifying, and so unjust.  My curiosity was piqued when I saw a notice for training in nonviolent civil resistance, conducted by local activists.  I immediately knew this is what I needed to do and I attended the training.  Soon after I was sitting in front of a chain-link barrier and blocking the entrance to the Truax Field Air National Guard Base in Madison, WI.

I was ready for my first arrest and I was feeling terrified.  I was shaking and crying, but I knew I needed to be doing this because our president was ready to kill hundreds and thousands of innocent children, women, and men and I could not do anything but what I was doing, and put my body on the line.  Soon a police officer came and took me by the arm.  We walked to his car where he wrote me a citation and released me.  It was one of the easiest arrests I have gone through.  There were about 15 of us risking arrest in Madison, but it turned out that hundreds of people across the country were also being arrested that same day in this campaign organized by Iraq Pledge of Resistance.  I later found out that my dear friend Malachy Kilbride was arrested for the first time that same day.

I participated in several more nonviolent actions of civil resistance in Madison over the next year, and then I went to Washington, DC for my first action there.  On September 26, 2005 I was arrested with Cindy Sheehan and about 270 others in front of the White House.  I was hooked and I knew this is what I needed to be doing with my life.  I realized that engaging in civil resistance was something that I was feeling called to do on a deep spiritual level, and I couldn’t ignore that calling.  Since then I have been arrested more than 40 times in various places around the country as I act in civil resistance to the crimes of our government.

What I do is civil resistance, not civil disobedience.  In civil disobedience, one would break an unjust law to try to change it.  This is what happened during the civil rights era when people would be arrested for sitting at lunch counters in the south.  In civil resistance, I am not trying to break a law; rather I am calling on my government to uphold the law.  Though I am not trying to get arrested, I know that I risk arrest as I act in resistance to the illegal actions of my government.

One of the most transformative actions I participated in can illustrate this point.  Bush II was in the White House and Republicans controlled both houses of congress.  In November of 2006 Democrats won a majority in Congress.  So many people were so happy about this and thought that now Congress would vote against funding the war in Iraq and the war would come to an end.  In March of 2007 a bill came before Congress for funding the war.  I was in DC and we were going to do an action, but hadn’t decided what we would do.

On March 29, 2007 we were getting ready to go to the Hart Senate Office building with cardboard tombstones and a list of names of US soldiers and Iraqis who had been killed in the war since the Democrats took control of Congress.  While we were getting ready, my friend Pete Perry called my cell phone and told me he was in the Senate gallery and the Senate had just voted to continue to fund the war.

About 20 of us went to the atrium of the Hart Senate office building and set up the tombstones and began to read names of the dead.  I was not breaking an unjust law to try to change it, but rather I was acting in resistance to the crimes of our government.  I wasn’t trying to get arrested, but I knew there was a good chance I would be if I continued to stand there and read the names of the war dead.

And so I did stand there and continue to read the names, even after the police came and told us to stop, because I did not believe I was doing anything wrong.  It was the only place in the world that I needed to be at that time and I was doing just what I needed to be doing.  I was arrested with about seven others for “unlawful conduct”.  We had a jury trial and were acquitted.  This experience helped me to understand on a deeper level what I was doing and why.

We are in a similar situation today with the Democrats just winning a majority in the House.  Again, so many people are placing their hopes with the Democrats, and I fear we will again be disappointed like we were in 2007.  I hope that we can see more clearly today that the Democrats are not going to save us.  Unfortunately, Democrats are part of the system of unending militarism and policies that cause the rich to get richer, and the rest of us to suffer.  Change will only come when the people rise up together and demand change.

I am constantly asking myself why I engage in nonviolent civil resistance.  There is not one easy answer and there are many levels to explore.  Whether what I am doing is “effective” or not is not the most important question.  We can never really know when a seed has been planted, and what impact our actions may have.  We are up against the greatest empire the world has ever seen, but we must continue the resistance.  Daniel Berrigan explained it this way, “One is called to live nonviolently, even if the change one works for seems impossible.”

I guess the most important reason I continue this work has to do with my conscience.  I have done so much organizing with my friend Malachy, and we have had many discussions about this.  Several years ago he said to me, “Once you know, you can’t not know.”  And so I know that our government is killing thousands of innocent people and I can’t not know that, therefore I feel I have to do everything in my power to stop it, including putting my body on the line, and giving up my own safety and comfort as a way to speak out against these crimes.

It is the killing of innocent children that is so heartbreaking and inspires me to take action.  As a grandmother, I think about how much I love my own grandchildren and how I would feel if anything happened to them.  I have often said that as a grandmother I need to spread my arms wide and embrace all the children of the world and do everything I can to keep them safe.

Today there are so many things going on, causing so much difficulty and making life unbearable for so many people in the United States.  As a result we are seeing a growing number of people speaking out against the injustices in this country, such as poverty, racism, environmental destruction, and many other -isms.  Maybe it is because people are enduring so much suffering in their own lives that it makes it difficult to look at what is happening to others.  There are not a lot of people doing antiwar work with a willingness to speak out against the extreme militarism of our country and its impact on the people of the Middle East and of Africa.  Yet, there is such a deep connection between militarism and the other problems we face here in this country, and we can only solve these problems if we deal with that connection.

And so I will continue to speak out and to act in nonviolent civil resistance against the militarism of our government.  We need more people to join us and I hope that many of you will consider this kind of work.  We really can make a difference.  Malachy and I will be organizing nonviolent civil resistance with Voices for Creative Nonviolence.  If you want to be part of our actions and also learn more about the rest of the great work being done by Voices, you can be on the mailing list by contacting Voices at <info@vcnv.org> . You can contact me, Joy First, at <joyfirst5@gmail.com> and Malachy Kilbride at <malachykilbride@yahoo.com> . If we join together and take action, justice will prevail.