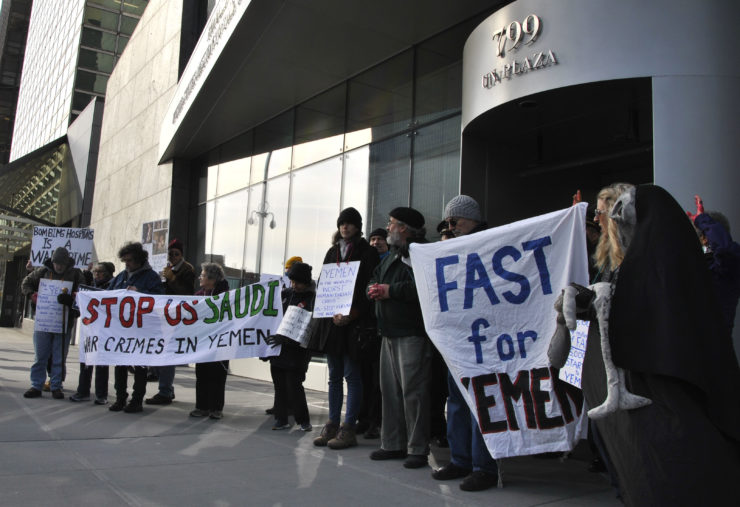 On January 2nd, 2019, eleven people from New York, New Jersey, Maine, Illinois and Iowa protested the the Saudi-led, U.S.-supported bombardment and siege of Yemen by nonviolently blocking the doors of the United States Permanent Mission to the United Nations at 799 United Nations Plaza in New York. Far outnumbered by officers of the New York City Police, the protestors were arrested and later released pending court appearances. 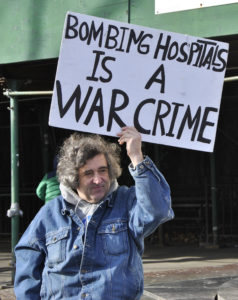 The protest was a part of “Fast for Yemen,” two weeks when participants fasted from solid food in solidarity with the people of Yemen suffering from the world’s worst famine in over a century and took part in daily protests and marches in New York City and in Washington, DC. Along with the US Mission, the fasters and their friends brought their protest to some of the other parties to war crimes in Yemen, to the missions or consulates of Saudi Arabia, Qatar, the United Arab Emirates, the United Kingdom, France and to the offices of Lockheed Martin.

The eleven defendants, Kathy Kelly, Joan Pleune, Alice Sutter, Manijeh Saba, Trudy Silver, Jules Orkin, Brian Terrell, Bud Courtney and Al Pereira, will appear in Criminal Court of the City of New York, 100 Center St., at 9:30 AM on Monday, February 25, to answer to charges of disorderly conduct. Carolyn Coe and Ed Kinane will be represented by an attorney. The public is encouraged to attend this hearing to show solidarity with the defendants and with the people of Yemen. 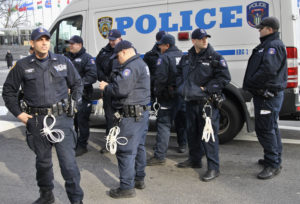 4 to 7 PM: The defendants and their friends invite the public to an event, The Fierce Urgency of Now: YEMEN! at the 5C Cafe and Cultural Center at 68 Avenue C, on the corner of E. 5th Street. This will be an afternoon to raise awareness and also raise funds for legal and other expenses. $10 donation is requested. Among the performers for the afternoon will be Rose Tang, Vinie Burrows, Flames of Discontent, Trudy Silver’s Where’s the Outrage, Bud Courtney and Anthony Donovan, Raymond Nat Turner and Ras Moshe. For information call 212-477-5993.

Friday, February 22, at 11 AM- 1 PM: gather at the “Isaiah Wall,” Ralph Bunche Park, 1st Avenue and E 42nd Street, across from the United Nations. At 11:30, process to 42nd and Lexington, offices of Lockheed Martin. Lockheed Martin is one of many arms manufacturers that are profiting from the war in Yemen- On August 9, 2018, A Saudi Air Force jet dropped a 500 pound bomb made by Lockheed Martin on a school bus, killing more than 40 children and their teachers.

11 AM: at 11 AM- 1 PM: gather at the “Isaiah Wall,” Ralph Bunche Park, 1st Avenue and E 42nd Street, across from the United Nations. At 11:30, process to US Mission and Saudi Consulate, 866 2nd Avenue, to demand that the United States and Saudi Arabia immediately and permanently end all military and economic assault on Yemen.

7:PM: Rise and Resist meeting at People’s Forum, 320 W 37th Street. Rise and Resist is a direct action group committed to opposing, disrupting, and defeating any government act that threatens democracy, equality, and our civil liberties. Kathy Kelly and Brian Terrell of Voices for Creative Nonviolence will lead a discussion about resisting the war in Yemen.

Photos from January 2 at the US Mission by Sophia Ko