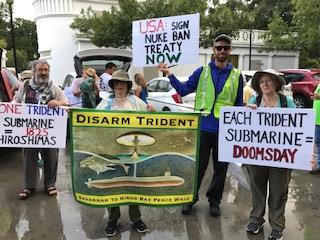 The statement below was issued by the seven Kings Bay Plowshares activists now awaiting trial for their April 4, 2018 action symbolically disarming the nuclear weapons arsenal based at the Kings Bay Naval Base in Georgia.

The Kings Bay Plowshares 7 released the following statement on Monday: “On Friday, the United States unilaterally withdrew from the landmark Intermediate Range Nuclear Missile Treaty (INF). ‘There is a real and present danger that this action will provoke a renewed nuclear arms race and brings us closer to nuclear war,’ says Martha Hennessy, granddaughter of Catholic Worker co-founder Dorothy Day and co-defendant of the Kings Bay Plowshares 7.”

[The seven Catholic defendants are “charged with three federal felonies and one misdemeanor for their actions in going onto the Naval Base at Kings Bay Georgia and symbolically disarming the massive amount of nuclear weapons at that base.” The group states that their actions are “to make real the prophet Isaiah’s command to ‘beat swords into plowshares.’” The seven are: Martha Hennessy, Mark Colville, Clare Grady, Jesuit Fr. Stephen Kelly, Patrick O’Neill, Carmen Trotta and Elizabeth McAlister (the widow of Philip Berrigan). [See KingsBayPlowshares7.org as well as National Catholic Reporter coverage and recent piece in The Brunswick News.]

The group’s statement continued: “This is not the first failure by the U.S. to either endorse or abide by treaties which would reduce the threat posed by the mere possession of weapons of mass destruction. The crucial Comprehensive Nuclear-Test-Ban Treaty was adopted by the UN General Assembly in 1996, and has been ratified by 166 countries, but the U.S. is not among them. In 2001, President George W Bush formally withdrew from the Antiballistic Missile Treaty (ABM) signed with the U.S.S.R. in 1972. We must worry that the U.S. will next quit the New START Treaty signed with Russia in 2010; such an action would erase a legally binding, verifiable agreement capping the number of strategic nuclear warheads possessed by the nuclear powers.

“Since 1980 Plowshares has been a movement of nonviolent symbolic direct actions disarming nuclear weapons on at least 100 separate occasions.

“Most recently, on April 4, 2018, seven Plowshares activists entered the Kings Bay nuclear submarine base, in Georgia for a nonviolent symbolic disarmament action. The base is homeport to six U.S. nuclear ballistic missile submarines, each armed with 16 Trident II missiles.

“The Kings Bay Plowshares 7, all devout Catholics, now face up to 25 years in federal prison. Their trial in Southern Georgia federal court may begin in March or April. As in previous acts of civil resistance and conscience, the defendants seek to expose the illegality and immorality of Trident’s omnicidal nuclear weapons.

“The INF Treaty is a highly imperfect shield against the growing nuclear arsenals festering in nine countries. What will help to ensure human survival is the moral conviction of people willing to undertake symbolic acts as one way to chart other roads leading to a disarmed world.

“With actions such as Kings Bay Plowshares 7 and the International Campaign to Abolish Nuclear Weapons, also known as ICAN (the 2017 Nobel Prize winner), which is promoting the Treaty for the Prohibition of Nuclear Weapons, this nation could pull back from the brink of omnicide.”

“Pulling out of the INF Treaty was an unconscionable and reckless act on the part of the Trump administration,” said Kings Bay Plowshares defendant, Patrick O’Neill. “Such unilateral action involving weapons of mass destruction only serve to put our planet at greater risk for the use of nuclear weapons, which could end the human experiment.” 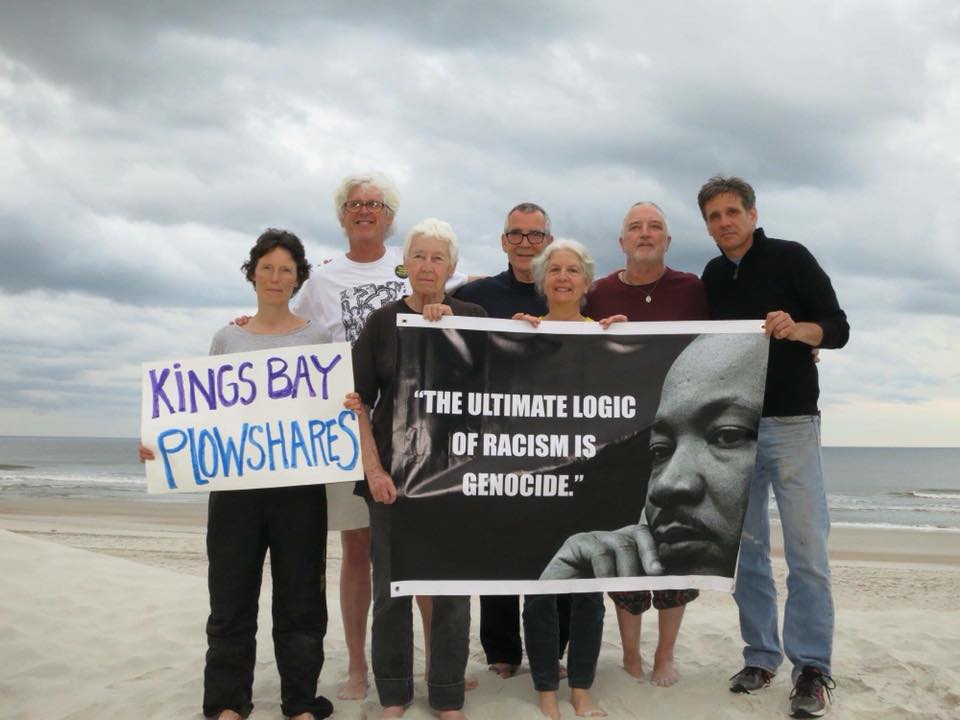