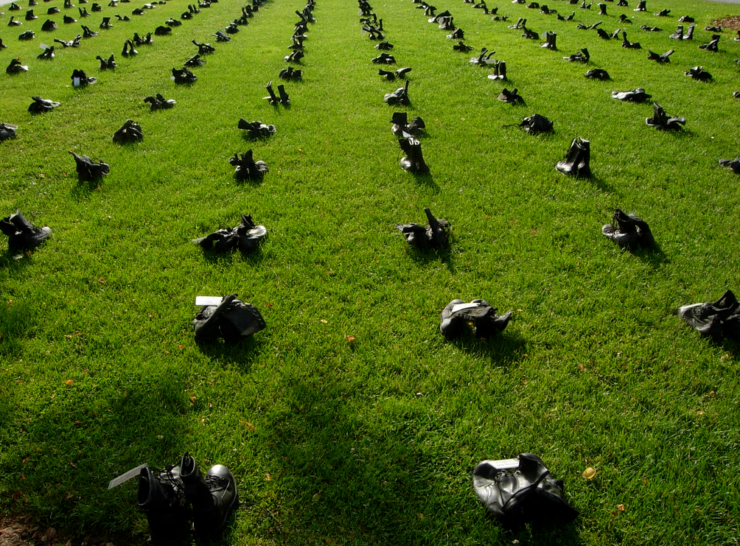 The sun came out today. It’s been gone for a while. That means all of the lawnmowers came out too. It’s been soggy around here, and any chance for a fellow suburbanite to cut the grass is taken up immediately. It’s loud outside. It sounds like the humming of dozens of gasoline-powered bees. I mowed the front yard yesterday, and that was enough for now. The backyard will probably be a swamp until July. It’s best that I leave it alone.

Today is Sunday, so it’s not actually Memorial Day yet. But it feels like it. I can see the American flags popping up all over the place. I have read the ads in the paper for the Memorial Day Weekend sales. There is that noxious faux patriotism that infects everything, at least for the next couple days. It doesn’t matter. By Tuesday, nobody will give a f— about the soldiers who died defending this country. By Tuesday, nobody will remember the veterans who are crippled and maimed. By Tuesday, people will pretend that we are not a country at war.

That’s just how it is in America.

I walked to church this morning. It’s seven miles from our house to St. Rita Parish. I enjoyed the walk. I was alone, and I could listen to the birds, and I could examine the flowers of a belated Wisconsin spring. It took a little over two hours for me to walk to Mass. I am very grateful for those two hours.

I got to our church, and I spoke to one of our ushers (greeters). Dan shook my hand and said, “Happy Memorial Day!” He knew that I was a vet. I thought for a moment, and then I told Dan,

Dan considered that, and said, “Yeah, I think I will try that in the future.”

I served as lector at Mass this morning. That means that I read from the Scriptures in front of the assembled believers. It also means that I read the “Prayers of the Faithful”, the combined petitions of our Catholic community. That part was difficult, very difficult.

Being that it is a national holiday, there were several prayers concerning soldiers, dead or living. Keep in mind that I have skin in the game. I am a veteran, although (through the mercy of God) not a combat vet. Our oldest son, Hans, is a combat vet. He fought in Iraq, and he came back here all screwed up.One of the communal prayers said, “We pray for all veterans, that they may be healed of any physical and mental wounds.” Since I was at the microphone, I added “and any spiritual wounds”, because all of these bastards have spiritual wounds. Every one of them.

The next prayer was for the end of wars. That’s where I nearly lost it. I had not planned on it. It just happened.

I prayed, “Let us pray for the end of ALL WARS!” I damn near screamed that out. The congregation yelled back to me, “LORD, hear our prayer!” I had to pause for a bit. My mind reeled, and my chest heaved. Even now, I feel overwhelmed. I just wanted to cry. I kept going, somehow. I cried later.

I do what little I can do.

That has to be enough.

Frank Pauc is a longtime friend and supporter of Voices for Creative Nonviolence: his website is http://frankisemptiness.blog