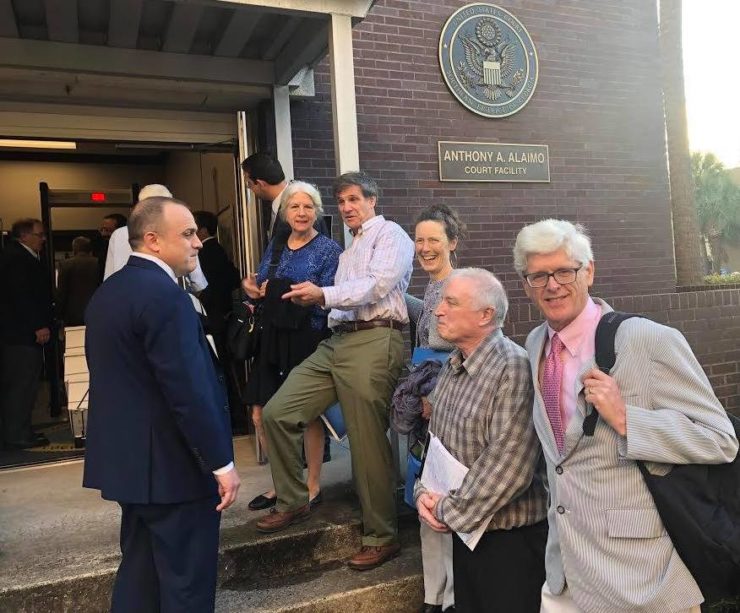 Thank you for the tremendous outpouring of support for our dear friends and family members facing years in federal prison. The guilty verdict on October 24 was not a complete surprise as the court did not allow the expert witnesses. The jury in Brunswick, GA never heard from former National Security Council member, nuclear war planner, and whistleblower Daniel Ellsberg, international law expert Francis Boyle, or theologian Jeannine Hill Fletcher.

Nonetheless, together the Kings Bay Plowshares 7 and all of their supporters have offered a profound witness for the world. There is more to do.

Fr. Steve Kelly, S.J. waits in the local jail for the sentencing date, likely in January. The six other defendants wait at their homes under curfew and travel restrictions. Reports on each of the four days of the trial are listed below. You can find many articles and interviews since the trial on our website.

According to supporters in Brunswick, there are lots of new conversations about Trident’s nuclear weapons since the trial! Thanks to all who traveled to Georgia. A couple of hundred supporters came and filled the regular courtroom, plus an overflow courtroom, while others held vigil outside each of the four trial days. We passed out hundreds of flyers to locals as they walked by the courthouse.

It was a week of community and the power of witness. Sunday’s Festival of Hope involved moving statements from each of the defendants, other speakers, and song. Every day we gathered for meals. Early in the week Plowshares activist Patrick O’Neill shared with us, “We’re not hoping for a hung jury. We aren’t here wanting to get an acquittal. At this trial, we want to speak truth to power.” Here is a video of the KBP7 activists and supporters as they came out singing from court following the verdict: https://www.youtube.com/watch?v=MONkguTdryA

There is a lot you can do to spread the word of the Plowshares action and to multiply their efforts to abolish nuclear weapons.

1. Send Letters to the Editor to Your Local Newspapers

Inform your local community with letters and opinion columns on how Trident nuclear weapons relate to economic and racial injustice, the climate crisis, the Religious Freedom Restoration Act, and how the exclusion of expert witnesses affected the trial outcome. Click here to view four templates of letters you can modify, personalize, or submit as is.

2. Send a Letter of Recommendation to the Judge – Pending

The KBP7’s legal team is preparing templates of letters of recommendation supporters can use to write letters to Judge Lisa Godbey Wood for her to consider before sentencing. The letters would describe the defendants’ good character and be apolitical in nature. It’s very important that the letters be sent to our lawyers’ office only.  We will include our lawyers’ address with the template from the legal team when it arrives sometime in the next week. Watch for the email.

Thank to your donations, we have mobilized thousands of people around the world to speak out for the abolition of nuclear weapons. We have educated communities about the unprecedented dangers of the Trident II D5 missile system. We have supported our seven friends in their prophetic witness for life and peace. As you can see, our efforts are ongoing. Please help with expenses, housing, and supporting defendants’ families following the verdict and the upcoming sentencing.

Elizabeth McAlister’s 80th birthday is on November 17. Please keep her in thought and prayer in this time between trial and sentencing. If you would like to write to her or send her a card you can use whatever color ink you want! Liz’s current address is 30 Broad Street, New London, CT 06320.

6. Vigil at the Kings Bay Base

At the main gate every third Saturday.

In Brunswick, at the county jail. Click the link for important instructions. For example, you must use his formal given name, Stephen Kelly.

8. Join Us for the Sentencing

It will be in Brunswick, probably in January. We will let you know as soon as we know.

The GA Festival of Hope, the tribunal, press conferences, and more!

…And into plowshares turn their swords. Nations shall learn war no more!

Peace and blessings upon you,