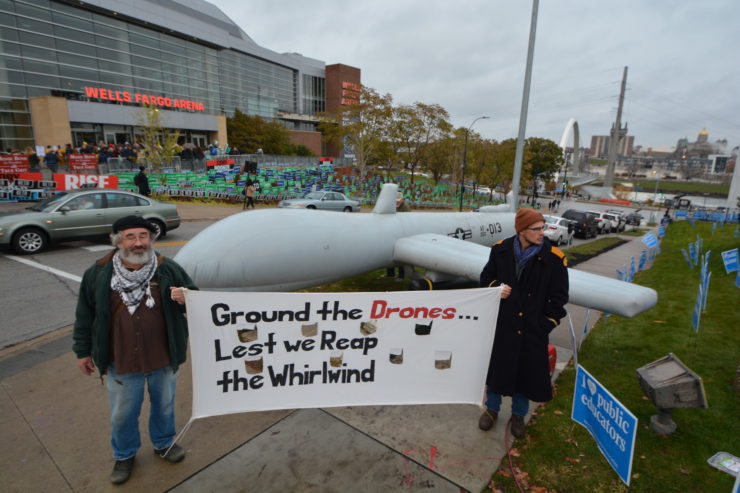 Essam Attia, an artist and activist from New York, brought his inflatable life size drone replica to Des Moines to protest outside the Iowa Democratic Party’s Liberty and Justice Celebration on November 1, 2019. With help from KnowDrones.com and local Veterans for Peace and Catholic Workers, Essam confronted many of the 14 Democratic candidates who attended the event about their positions on the use of weaponized drones, extrajudicial killings and the Authorization for Use of Military Force (AUFM) that has been used since 2001 to excuse U.S. aggression in more than 70 countries.

A fund raiser for the Democratic Party and run-up to the 2020 “first in the nation” caucuses, the Liberty and Justice Celebration was attended by more than 13,000 party activists. Whatever potential there might have been for the Iowa Democrats’ “Biggest Night of the Year” to be a forum for a serious discussion of issues instead of a giant pep-rally went unrealized. The fact that Essam’s drone model was overshadowed by Elizabeth Warren’s 25 foot inflatable golden retriever was a study in contrasts. The drone and questions Essam raised attracted the interest of many Iowa Democrats and other passers-by, but were ignored by the press and by most of the candidates

Essam produced a short video documentary of the event, ESSAM on the Campaign Trail

and Brian Terrell outside the event.