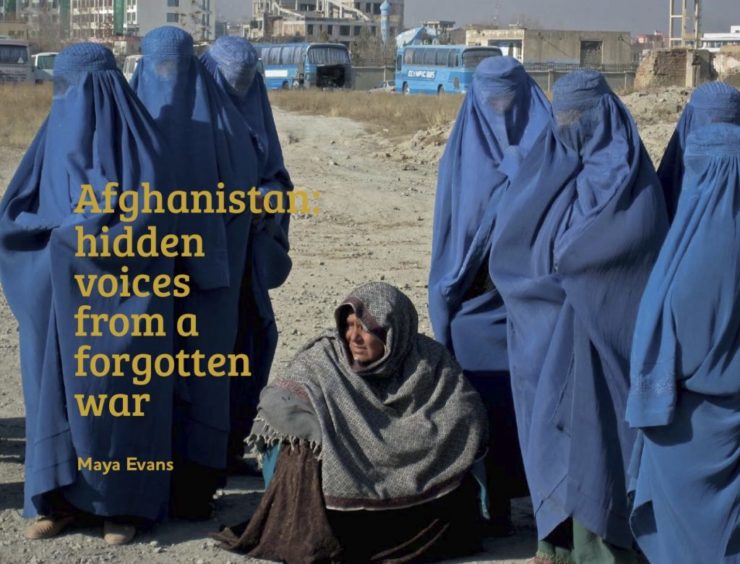 Stories and testimonies collected from some our visits to Afghanistan, giving a voice to women and young people, the very voices recent peace negotiations have excluded. The booklet includes essays on women, mining, deportation, the peace process, Britain and the Great Game, the case for US reparations, and moreover, the voices of ordinary Afghans.

In the US, copies can be obtained for a donation to Voices for Creative Nonviolence ($10 suggested to cover costs and shipping) mailed to Voices for Creative Nonviolence, 1249 W Argyle Street #2, Chicago, Il. 60640. In the UK, contact: vcnvuk@gmail.com   A pdf version can be downloaded at http://vcnv.org.uk/wp-content/uploads/2019/10/Afghanistan-hidden-voices-from-a-forgotten-war-2.pdf

Maya Evans is the United Kingdom co-coordinator of Voices for Creative Nonviolence. She is also a councilor on Hastings Borough Council, East Sussex, and is the council’s cabinet member for Climate Change, Sustainable Development and Biodiversity.

180 years of conflict and misery, and no end in sight.

We talk about Iraq, we talk about Syria and Palestine – there’s usually a remarkable silence on events in Afghanistan. If we hear about it at all, it’s usually in the context of our soldiers having a hard time – which they undoubtedly do, but…

Reading about its place in the history of the great world powers, you’d think Afghanistan was a chessboard rather than a breathtaking landscape of snow, sunlight and mountain heights. Both Britain and the US have been manipulating events there for nearly two centuries. In real life, that means a people who are born, live and die in the midst of wars and other cataclysms that often make little sense to them.

We have people here in Hastings for whom the realities of life in Afghanistan are far more visible and thanks to two of them, author Cllr Maya Evans, the UK co-ordinator of Voices for Creative Non-Violence and editor Felicity Laurence, Chair of Hastings Community of Sanctuary, we now have this extraordinarily appealing book of photos and personal testimonies that goes a long way to filling that gap in our understanding.

As you turn its pages and meet some of the people there, you realise that, because of our country’s actions, their stories should be understood as a very significant part of our history.

Women in Afghanistan gained suffrage before most UK women did, and before any US women did. They have had times when they have made inroads into education and professional life – and all too many times when they were kicked back to extreme oppression, and desperate poverty and danger. The most recent peace talks in Afghanistan have grudgingly made room for a few women, but they felt their part was symbolic – despite the fact that women and children usually bear the brunt of the consequences of war and the economic and strategic impositions of great powers at work.

By contrast, this book is packed with the voices of women, children and young people – and they do what no amount of news reports seem able to do – they bring the country alive. Get hold of a copy – experience it. It’s important!

Although the recent Afghan crisis began in 2001, there was never really ‘peace’ – in this short book, with its copious photographs, Maya shows how we’ve been at it out there for 200 years. Many of the issues used to justify the 2001 invasion were rooted in the fall-out we created by training and arming ‘the enemy of our enemy’ to resist the Russian war (1979-89). The Mujahedin were traditionalist Muslims who whilst differing on the extreme anti-modernism of the Taliban, are not so dissimilar, and many members became Taliban.

In denying the right to self-determination to Afghanistan, and attempting dubious linkages with al-Qaeda to ‘justify’ invasion (though pressure from Pakistan, and assault from the West pushed some Mujahedin to join the Taliban: and the same is true of the opium-traders, who, historically, were anathema to Taliban religious sensibilities, and were more closely allied to the unsavoury war-lords the West took as partners this time round), the West is undeniably culpable in the ongoing crisis. At the same time, Westerners do find many aspects of Taliban rule more than unsavoury, not least in regard to their attitude toward women. Of course, our own branch of the desert religions has a bad track-record on that too, and it’s fair to say that, propaganda aside, the rights of women played no true role in the strategic arguments for warring against them.

Since 2011 it is estimated that over 31,000 civilians have been killed (a third of the casualties) and as many injured. Meanwhile, infrastructure crumbled, and society risked, and risks, complete implosion. The West has done little to properly aid a reversal of this situation. But brave and resourceful pressure groups and charities have taken serious risks to provide support. Maya has been working with VCNV for many years now, and this book gives us a snap-shot of life in the precarious cities of Afghanistan. Many of the stories we hear are very sad, but there is joy and hope too. Maya talks to women and young people about their future, voting rights, and the peace process, she describes the difficulties they face every day, and intimates paths of hope. In the epilogue, Basir Bita, an activist in Kabul, talks of the younger generation’s hopes for a better world.