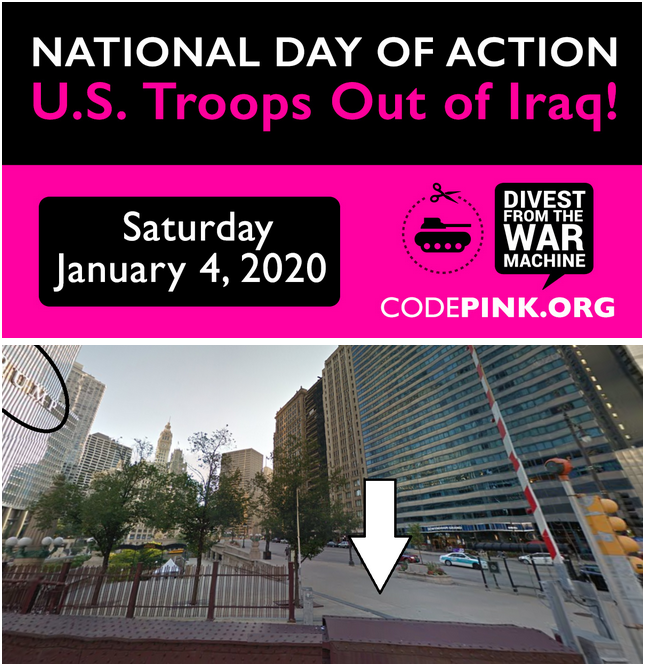 This Saturday, January 4, CODEPINK, the ANSWER Coalition, Veterans for Peace, United AntiWar Coalition (UNAC), World Beyond War, Popular Resistance, and Voices for Creative Nonviolence (among others) have joined in calling for a National Day of Action to demand:

We invite people in the Chicago area to come out for some or all of a two-hour emergency protest to begin at 12 noon this Saturday near Chicago’s Trump Tower (Wacker and Wabash).

Donald Trump has ordered hundreds and perhaps thousands of more U.S. troops to the Middle East in response to the massive protests in Iraq following the latest U.S. aerial assault that killed scores of Iraqis. The protesters’ siege of the U.S. Embassy has ended as of now; but the recent U.S. bombings of Iraq reveal the criminal, imperial character of the U.S. occupation of Iraq. More than a million Iraqis have died during the past 28 years as a consequence of U.S. occupation, bombings, and sanctions. Tens of thousands of U.S. troops have either been killed or suffered life-changing wounds. The U.S. government has spent more than $3 trillion dollars in the on-going occupation and bombing of this oil-rich country.  Co-Sponsors of the Chicago protest include: ANSWER Chicago, Party for Socialism and Liberation – Chicago, People United Against Oppression, Refuse Fascism Chicago, CODEPINK, and Voices.

UPDATE: After this protest, Chicago’s IRAN WAR EMERGENCY RESPONSE PLAN is still in effect: There’ll bea 5:30pm protest at Trump Tower the day bombing starts or if it’s after 3 pm the next day. lease check here for updates and at https://www.facebook.com/ANSWERChicago as Chicago plans develop: and please feel free to call us at 773-865-6042 (our coordination cell-phone for biweekly Iran war flyering) between 8AM and midnight for updates, or at the office 773-878-3815.

As Saturday draws near, please direct your friends outside Chicago to this partial list of nationwide protests, and your Chicago friends to this Chicago protest event page.