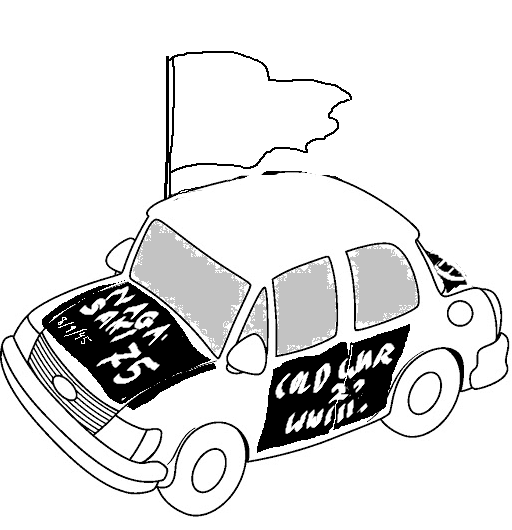 We’d like to invite you to join us this Sunday Aug 9 for a car procession through Chicago memorializing the Aug 9, 1945 bombing of Nagasaki, along with the 75 tragic, harrowing years of the Nuclear Weapons Age which followed after.  We’ll keep a special focus on our antinuclear activist friends, the Kings Bay Plowshares 7, who are awaiting key sentencing dates in Georgia.

This Sunday we will begin at a Clark and Wilson parking lot on Chicago’s North Side, with cars gathering at 12:15p to be decorated with consistent, organizer-provided signage and dramatic black window flags. Please RSVP here so we will have enough!  We’ll then process slowly through the city arriving approx. 3pm for a final ceremony at Henry Moore’s “Nuclear Energy” sculpture in Hyde Park, on the site of humanity’s first sustained nuclear reaction.

Event details:
12:15p – Gathering & preparation of the cars for the Memorial procession at the Staples parking lot, NW corner of Wilson and Clark in Chicago (4600 N. Clark Street).
1:00p – Speakers in Staples parking lot before send-off of car procession (Route to be provided to those who RSVP)
Roughly 2:45-3p – Procession arrives at the Henry Moore sculpture, 5625 S Ellis Ave, Chicago, for additional speakers, a memorial and acknowledgement of the lives lost.

Out of respect for others, all attendees and speakers will practice social distancing and wear masks.

Nagasaki Memorial Procession drivers should arrive early so that themed, consistent signage along with large, black event flags can be attached by poles to their cars (we will provide both). Again, please RSVP here: https://forms.gle/SBG5jE2z65Ai2eHu5

We plan for the procession to be solemn and slow ending at the Henry Moore sculpture, site of the world’s first sustained nuclear chain reaction.

August 9th is the 75th Anniversary of the U.S. nuclear bombing of the city of Nagasaki, Japan, just 3 days after the U.S. bombing of Hiroshima. The two attacks killed in excess of 150,000 people immediately, and caused cancers, birth defects and premature deaths to this day.

Humanity arguably now faces a worse nuclear danger than it did at the height of the Cold War. The Bulletin of Atomic Scientists have set their famed “Doomsday Clock” at 100 seconds, the “Clock’s” first time ever counted in seconds. Currently 40 out of a needed 50 nations have ratified a U.N. treaty definitively criminalizing the world’s few nuclear stockpiles. Yet vital international agreements to reduce and control nuclear weapons worldwide are being abandoned by the Trump administration. And rather than reduce nuclear weapons, the Obama administration launched a multi-billion dollar “modernization” of the US nuclear arsenal, which continues under Trump.

At a time when the #BlackLivesMatter movement has sparked a new public consciousness about the diversion of community resources to state violence, the federal budget for developing and producing new nuclear weapons continues to grow. Tensions among nuclear-armed nations are rising to levels not seen since the Cold War.
People created nuclear weapons and designed the systems governing their use — and people can work to eliminate them.

As the only country to use nuclear weapons in conflict, the United States has a moral obligation to lead the world in ending this threat and to remember all those who were harmed in their detonation, testing and development.

As residents of, by far, the biggest military power in the world, we must continually press our leaders to take the actions necessary to ensure nuclear weapons are never used again, and to negotiate in good faith the global elimination of these most devastating weapons of mass destruction.