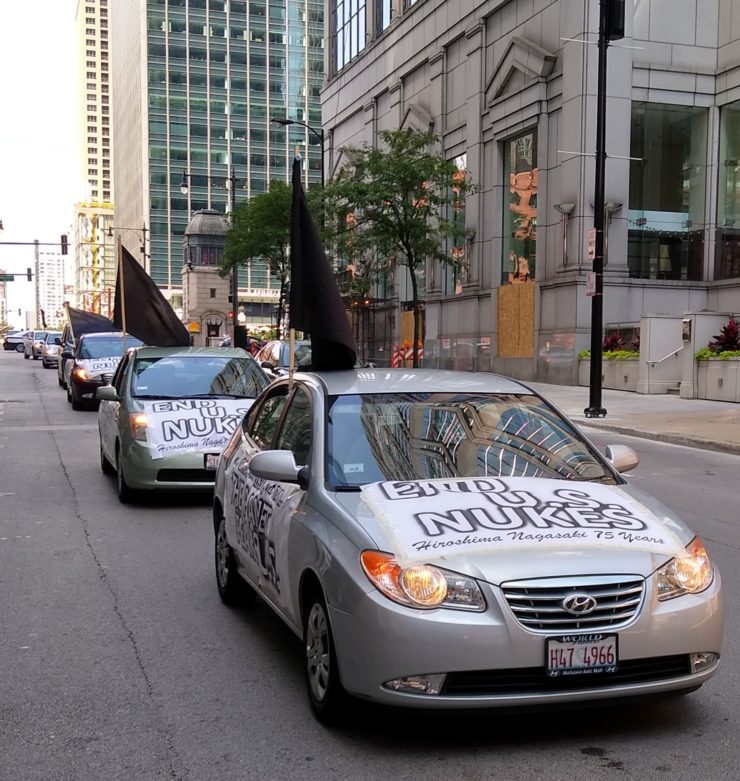 Please plan to join Voices Saturday 9/26 for a Car Caravan and Rally to End Nuclear Weapons. It will be the International Day for the Total Elimination of Nuclear Weapons.  We’ll be gathering at 11am to festoon our cars with large signs Voices will provide, and (for visibility) white balloons, then heading south through the city to Hyde Park and Henry Moore’s “Nuclear Energy” statue, also the ominous site of humanity’s first sustained nuclear reaction.  We’re eager to email you a route map when you RSVP at https://forms.gle/ZxBBHsjtvbrqTgxu8.

11:00am – gather on Chicago’s North Side at Clark and Wilson (a Staples parking lot) to festoon cars with event-uniform signs (which the organizers will provide) and white balloons.
NOON – A brief rally with speakers, plus instructions for the caravan.
12:30 PM – set off towards Henry Moore Sculpture at 5625 S. Ellis, Chicago*
2:00 PM(ish) – arrive at Moore Sculpture
*Route map will be sent to all who RSVP through this link: https://forms.gle/ZxBBHsjtvbrqTgxu8

Our co-sponsors for this event include CODEPINK: Women For Peace, Chicago Area Peace Action, and Chicago Committee Against War and Racism.

Achieving global nuclear disarmament is one of the oldest goals of the United Nations and one of the most elusive. Currently 45 out of a needed 50 nations have ratified a U.N. treaty definitively criminalizing the world’s few nuclear stockpiles. Vital international agreements to reduce and control nuclear weapons worldwide are being abandoned by the Trump administration and rather than reduce nuclear weapons, the Obama administration launched a multi-billion dollar “modernization” of the U.S. nuclear arsenal, which continues under Trump.

The U.S. public is frighteningly indifferent to a weapon of mass extinction whose threat many bafflingly imagine to be somehow past. Humanity arguably now faces a worse nuclear danger than it did at the height of the Cold War. The Bulletin of Atomic Scientists have set their famed “Doomsday Clock” at 100 seconds, its first time counted in seconds, rightly adjusting for the arrival of hair-trigger hypersonic nukes. Many “near-misses”, occasions during which a nuclear strike almost happened, have occurred in the last 75 years. The speed at which the new hypersonic nukes travel and their potential proximity to their targets means that there would not be an opportunity to correct such a “mistake”. The consequences could, quite literally, cause nuclear winter and the starvation of large swaths of the planet. Join us to call for the Total Elimination of all nuclear weapons and the reallocation of our extravagant nuclear spending towards meeting human needs including the transformation we will need to undertake to slow climate change.