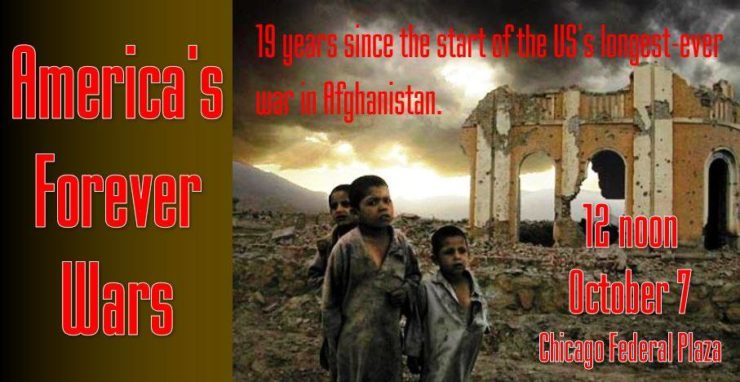 Chicago-area friends – please consider coming out to this noontime rally / press conference on Chicago’s spacious (social-distancing-ready) Federal Plaza on October 7, the nineteenth anniversary of the start of the U.S.’ never-ending and disastrous Afghan War. Voices is a cosponsor and we’ll be there with a message from Afghan friends.

October 7 marks the 19th anniversary of the longest war in U.S. history, the 2001 invasion and occupation of Afghanistan.

And Afghanistan is just one piece of a worldwide kaleidoscope of US military violence around the world including:

** occupations of Iraq and Syria
** drone bombings from Africa to Pakistan
** the proxy wars of Saudi Arabia vs. Yemen and Israel vs. Palestine
** threats to invade Venezuela
** devastating sanctions against dozens of countries
** over 500 military bases around the world, many with nuclear weapons — daggers at the throats of the peoples nearby them.

Almost an entire generation of Americans has lived with endless war. Babies not even born at the time of the US invasion of Afghanistan are now fighting in that country. Far worse, however, is the fact that over 1 million Middle Easterners are now dead to avenge the 3000 killed in the 9/11 attacks, and war has spread throughout the Middle East.

As revealed in the so-called Afghanistan papers – government documents released through Freedom of Information Act requests – senior U.S. officials have knowingly lied throughout the war, making optimistic pronouncements of success even while hiding evidence that the war was a disaster.

Despite this, in an effort to turn the tide of the Afghan war in the U.S.’s favor, Presidents Obama and Trump have both launched “troop surges.” Death and destruction were the predictable results while the puppet Afghan regime’s hold on the country, far from being strengthened, remained as precarious as ever.

While people in this country do not feel the direct physical effects of these wars, every bomb dropped represents millions of dollars less for our schools, health care, affordable housing, public transportation, physical infrastructure, and a myriad of other social services desperately needed in a time of pandemic and severe economic recession. With one-half of the federal discretionary budget going to the US military, and much of the rest given over to subsidizing the already-rich, it’s little wonder that there are only crumbs left for the left of us.

US politicians’ support for war and U.S. domination has been and remains thoroughly bipartisan. The 2020 election will not change that. To establish their “patriotic” credentials, Democrats typically vote for military financing and war with the same frequency as Republicans.

On the 19th anniversary of the United States’ Forever War, and relentless US violence around the world, please join us to denounce these wars that both major political parties continue to finance.

We will be having our event on the Plaza so that we can be socially distanced. Out respect for the health of everyone, please wear a mask.

Part of an organization? Please message us to co-sponsor! Thank you!