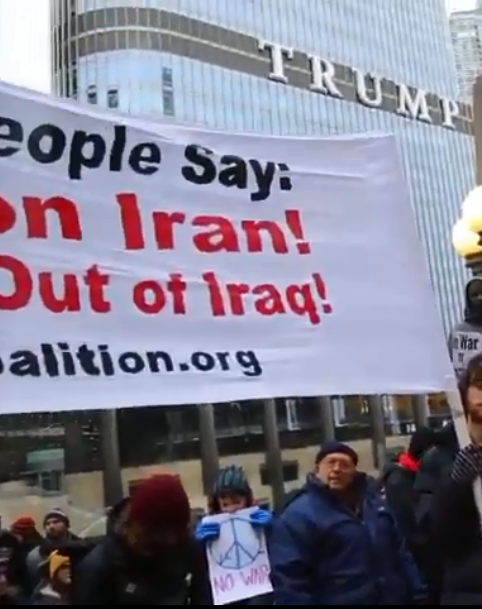 Ongoing U.S. sanctions against the people of Iran are unforgivably cruel economic warfare, but the latest high-level assassination of an Iranian scientist seems designed to provoke a new and extremely dangerous round of military violence, taking advantage of the ongoing transition between U.S. White House teams. Iran has no discernible nuclear weapons program: regime change remains the clear motive of our sanctions and killings. Throughout the current administration and well into the next, Chicago’s emergency plan remains in effect:

At least until Trump has left office, the protest site is Trump Tower, Wabash and Wacker on the river’s south side. (We’ll make sure to announce any change for the Biden years). And so long as COVID still rages in the U.S. (and Iran), we will meet masked and socially distanced.

The week of Joe Biden’s inauguration is also the week in which the U.S.-loathed Treaty on the Prohibition of Nuclear Weapons goes into effect, establishing every nuclear-armed nation as a despicably criminal one. Activists in Chicago are organizing three protests for that week: An inauguration protest Jan 20, a nuclear weapons protest on Jan 22, and the international day of protest, Jan 25, against the monstrous war in Yemen. We’re eager to keep you informed by email – please contact us at 773-865-6042 or info@vcnv.org.