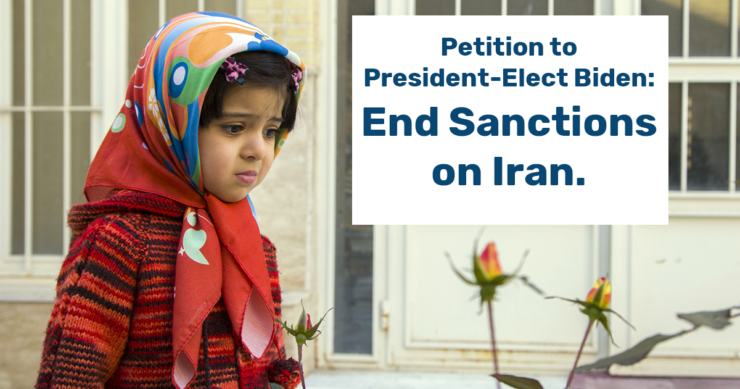 Voices has sponsored a petition a we’d like our friends to sign – the more signatures we can generate, the more new contacts we’ll be given to campaign against devastating U.S. economic and military violence.  This petition concerns the brutal sanctions against Iran and the threat of war with that country.

This petition targets the arriving President-elect and says only: “We strongly urge you to act swiftly upon your inauguration to end all sanctions against Iran and to rejoin the Joint Comprehensive Plan of Action as a first step in reducing tensions and creating open diplomatic relations with Iran.”  Challenging U.S. militarism will take a people’s movement and this campaign, initiated by our esteemed friends at World Beyond War, has an added mechanism to expand our circle of contacts.  Signers have an option to invite groups like Voices to contact them, and we’ve been offered as many new email contacts as the signatures we (and our friends) can generate demanding peace for Iran.

Several of us, traveling with a CODEPINK delegation, visited Iran in early 2019 and of course the current news from there is grim.  Brutal sanctions and sporadic military attacks arising from the U.S.and its regional clients are driving Iran’s government further to the right while driving the planet farther from security and peace – all while leaving innocent Iranians helpless in the face of a raging COVID pandemic.  We as individuals owe Iran’s people a debt of stolen peace, and we have to hit the ground running as a decidedly warlike Democratic Party takes office, all too often an event inspiring the peace movement to sit back.  The countries we target can’t opt out that easily. Let us link that petition one more time – there. 🙂

After you’ve signed, we’d love to hear separately from you by email or phone – current Voices members are preparing for big changes which you can read about elsewhere on our site. We’re eager to stay in touch.

A season of peace to you, and to Iran.