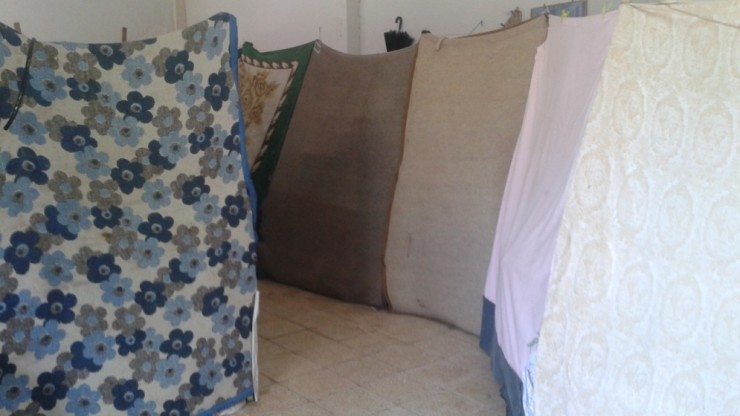 It is hard to put my feelings into words.  I am travelling as a peace witness in Iraqi Kurdistan.  Just the other day we visited a sheikh whom I had met in Fallujah in 2012.  He and his family were forced to flee to Kurdistan about two years ago.  Fallujah, as you probably know, is being held by ISIS.  None of the residents are allowed to leave.  People are literally dying of starvation.

We met in the rented apartment of another sheikh who also fled Fallujah with his family.  Although he himself is sick with cancer, both he and our sheikh friend welcomed us warmly.  The afternoon was balmy and pleasant, the room was airy and light, with cushions on the floor, a couple of plastic chairs and a bed which also served as a sofa.  Water was fetched immediately and we were graciously served sweets and tea.  In the course of our visit, we were joined by yet another sheikh from Ramadi.  The U.N. recently reported that the destruction in Ramadi, also in the Anbar region, was the worst they had witnessed in all of Iraq.

Outwardly everything seemed so normal that at first I forgot I was with people now counted among the hundreds of thousands who are internally displaced in Iraq.   In the next couple of hours though, we would hear many tragic stories that would dispel any thought of “normalcy.”
“We have lost everything” our sheikh friend said.  “We are like babies just being born.  We’ve lost schools, universities, houses, bridges, hospitals, markets.  All gone.  People in the U.S. need to know what their government did to the Iraqi people.  All this pain, destruction and hurt.”

Our host told of a woman who had no breast milk to feed her baby as she herself was starving.  However, she had a goat and, for a while, she was able to give this milk to her baby son.  Then the goat died.  At this point of the story the Iraqi woman translating for me was unable to continue.  Overcome by sorrow, she began crying and left the room to collect herself.  I learned later that this mother searched desperately for someone to give her baby to in order to save his life.

After a lengthy open discussion, we were invited to join the sheikh’s wife, watching children with other women of the family in a second room.  Again a very warm welcome belied an all-too-grim reality.  This dear woman’s mother, sister and daughter are all currently trapped in Fallujah, and with ten children in their collective care.  On occasion she is able to reach them by phone.  The women in Fallujah weep to her across the line.  They are reduced to eating grass.

“We can do nothing to save them!” the sheikh’s wife said.  “The government doesn’t help!  We don’t know how this is possible!” It was incomprehensible to me – I find myself simply unable to imagine this family’s pain. “We have a saying” she said. “People far away from the fire, don’t get burned.  They don’t feel the heat.”  Across that phone line, and waiting for the next call, she feels it.

As we stood to take our leave, we embraced and kissed one another.  One by one, I took the sweet faces into my hands.  They thanked us for the visit. Photos were taken to remember each other by, and I recorded all of the names of their loved ones in Fallujah so they will not be forgotten.  I would write those names here, and include the photo for those who read this, but I am fearful to do so.  My friends’ situation is so precarious already.

It was early the next day – that is, yesterday morning – that my driver and I left for Dahook, about three hours northwest of Erbil. The road to Dahook is dotted with many Yazidi, Christian and Kurdish villages.  My driver and his family are themselves internally displaced from one of the villages surrounding Mosel, and our trip would take us very close to his village. Actually we entertained the thought of visiting there, but the very real fear of random explosions and directed ISIS attacks decided us against the visit.

The family that was to host me in Dahook are Christians from the same village as my driver.  They lost a house to ISIS in Mosel in 2008 and fled after priests were murdered in their church.  They had lived there for twenty years.  They fled to a village called Teleskuf where they would live for another 6 years until ISIS took this village as well.  To date no one has returned to Teleskuf other than the Peshmerga.
We passed the area of the Mosel dam and later with my host family we looked together at a map marking the whereabouts of ISIS.   “We all know where ISIS (Da’ash) is”  they told me.  And lines were drawn on the map to show me their current location.  They were only kilometers away from us.

Upon arriving in Dahook we visited with some Yazidis in an unfinished building where they are living.  After a word of welcome we were given water, juice and sweets in a ceremonious manner, so typical of the graciousness in the Middle East.  An elderly gentleman shared the terrible story of one of his granddaughters, who had been away from the area at the time of the terrible August 2014 massacre and siege of Sinjar Mountain, but who, when she returned and learned of the brutality her people had suffered, found it so unbearable she took her life.  How to respond to such pain?   With action – Seated on the mat beside this sorrowing grandfather was a young Yazidi man who is studying in the university and plans along with other young Yazidis to reach out to about 5,000 children on the mountain with hopes of educating them.  I shared the story of my friends, the Afghan Peace Volunteers in Kabul and the fruits they are reaping from their literacy program with street children.

Next in Dahook we were able to visit several families living side by side as internally displaced persons in a church hall.   Excited little children led me to the curtain which acted as their front door. 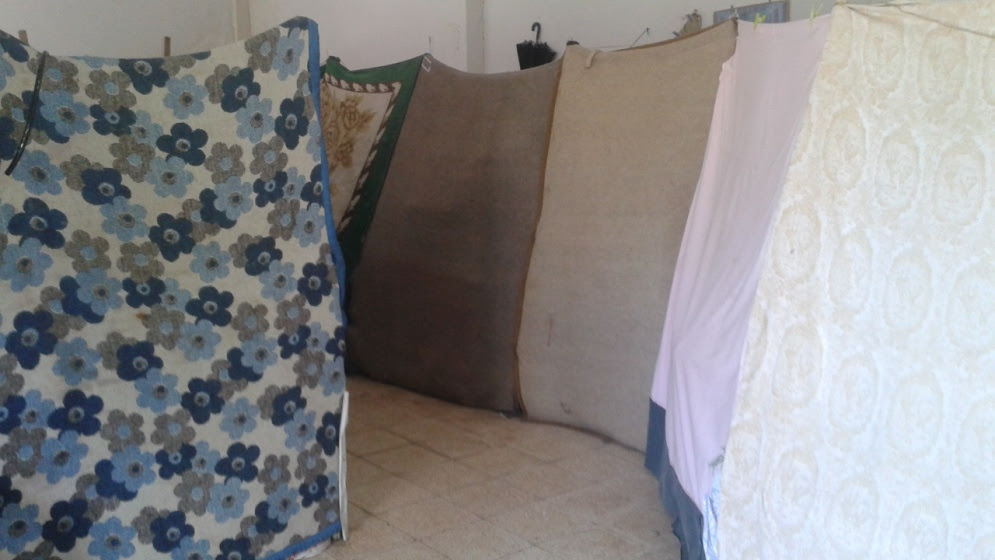 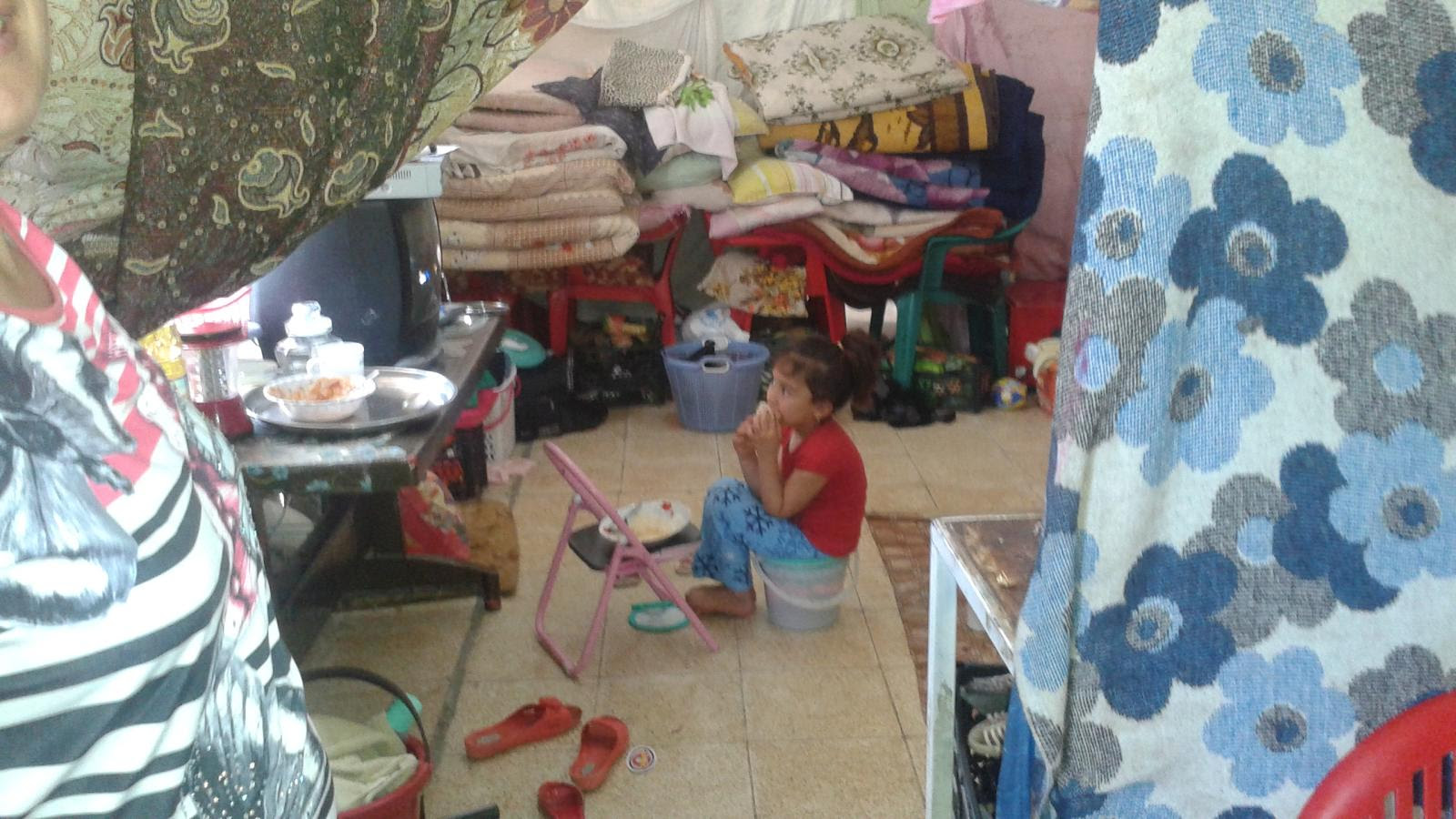 Behind the curtain
The families behind curtains like these, in camps, or in repurposed or unfinished buildings, have for the time a desperately welcomed measure of security.  But they have lost everything they owned.  The family I stayed with had fled here with only the clothes on their backs.  Fourteen people in a car!  Because they are in Kurdistan which is officially still part of Iraq, they have no refugee status and are not eligible for resettlement.  They would have to go to Turkey, Lebanon or Jordan and register there as refugees.  They would be at the bottom-of-the-pile, and in the meantime they would have no money with which to sustain themselves.

It’s hard to put my feelings into words.  “People far from the fire don’t feel the heat.”  Here in Kurdistan I find myself feeling the heat of the fire as I watch so many good people who are being burnt.

The husband and father of my host family has a mother and several sisters in the United States.  His wife has family in Canada, Germany and the US. They must feel the heat from here as few others in the comfortable West, author of so much of this region’s suffering, ever can.   “What can we do?”  my hosts ask.  “We want a future for our children.”

Cathy Breen is a member of the New York Catholic Worker community and a co-coordinator of Voices for Creative Nonviolence (www.vcnv.org). For more  information, contact info@vcnv.org.

One thought on “Stories by the Fire”